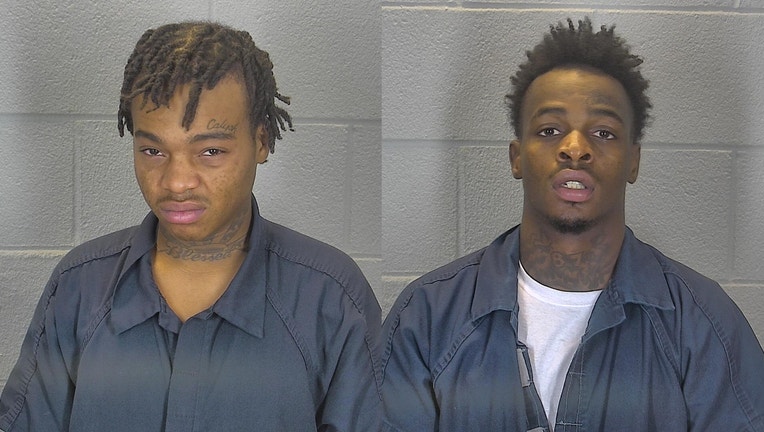 WILLOWBROOK, Ill. - Two men, who are in custody in Indiana on unrelated charges, have been charged with carjacking an elderly couple at gunpoint at a Willowbrook gas station.

Kevin Sanders, 22, of West Lafayette, and Antonio Davis, 20, of Chicago, have been charged with aggravated vehicular hijacking, aggravated battery and theft.

At about 2:47 p.m. on July 15, an elderly couple stopped at the Citgo Gas Station that is located at 6900 Kingery Highway, police said.

The female victim entered the store and when she returned to her vehicle, Davis and Sanders allegedly exited the rear doors of a stolen Dodge Durango and approached the couple's BMW.

The two defendants went to opposite sides of the victims' car.

Sanders allegedly approached the passenger side of the vehicle while carrying a long gun. Prosecutors said he then allegedly shoved the female victim away from the vehicle, which caused bruising to her body.

At the same time, Davis allegedly approached the driver's side of the BMW, pointed a firearm at the male victim's head and ordered him out of the vehicle.

Prosecutors said Davis and Sanders then allegedly took personal items from the couple, including cell phones, cash, the man's wallet and the woman's purse.

The two defendants then got into the victims' car and fled the scene. The stolen Durango followed them, police said.

During an investigation, authorities identified Davis and Sanders as the suspects.

On Aug. 16, authorities discovered that Davis and Sanders were arrested in Indiana on July 28 for armed robbery and other offenses.

Both men have been in custody since that time, prosecutors said.

"The allegations that these two men threatened their victims at gunpoint in the middle of the afternoon at a busy gas station are egregious and will be met with the full force and effect of the law," said DuPage County State’s Attorney Robert Berlin. "The filing of these charges sends the message that if you commit a crime in DuPage County, we will use all available resources to find you, charge you and return you to DuPage County if necessary, where you will face an aggressive prosecution."

Upon disposition of their cases in Indiana, Sanders and Davis will be extradited to DuPage County to face the charges against them, prosecutors said.