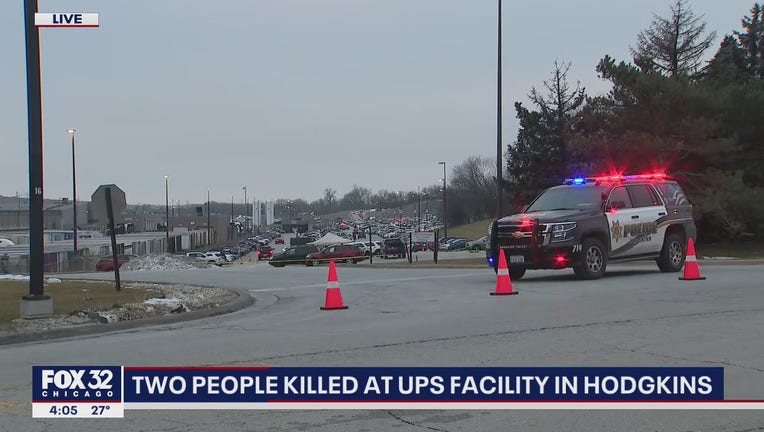 HODGKINS, Ill. - A man and woman were shot to death Monday in the employee parking lot of a UPS sorting facility in the southwest suburbs in what police are investigating as a murder-suicide.

Officers responded to the shooting about 1 p.m. and found the pair outside the Hodgkins facility, at 1 UPS Way, according to a statement from Hodgkin’s police.

Barbara Phillips, 30, and Fabian Young, 27, were pronounced dead at the scene, according to police and the Cook County medical examiner’s office.

Young died by suicide from a gunshot to his head, the medical examiner’s office said.

Phillips was a UPS employee, and a semi-automatic handgun was found near their bodies, police said.

A witness of the shooting spoke with investigators, according to police.

In its statement, Hodgkins police said the shooting was a "tragic and shocking incident" for the suburb of about 1,800 residents, located 17 miles southwest of Chicago near I-55 and I-294.

"The sympathies of all those at the Hodgkins Police Department go out to the families of those who have died," the statement said.

A spokesman for UPS said the company couldn’t comment on the investigation.

"We are deeply saddened by the incident that occurred this afternoon, and we are cooperating with the responding authorities," UPS spokesman Matthew O’Connor said in an emailed statement.

The UPS sorting facility employs around 11,000 people, according to Trains Magazine.

The Village of Hodgkins has no other deaths ruled as homicides, according to medical examiner data that goes back to 2014.