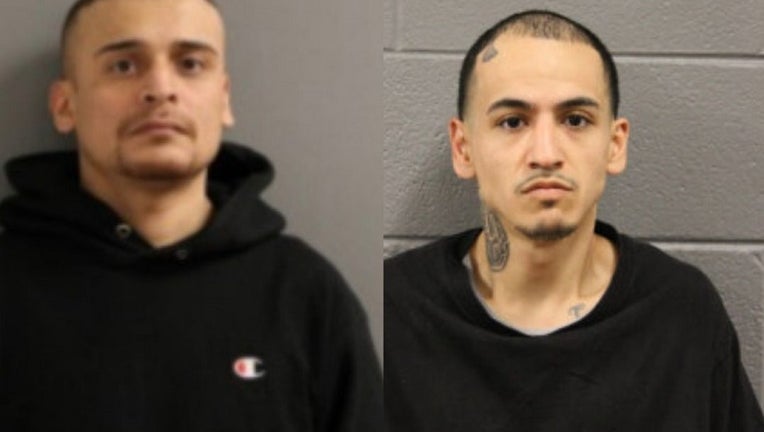 CHICAGO - Two men charged in connection with a homicide earlier this week in Little Village have been ordered held without bail for the fatal shooting of a 34-year-old man several times at close range.

David Chavez, 29, and Xavier Encarnacion, 28, — both of whom are alleged documented members of the Satan Disciples street gang — each face one count of first-degree murder in the fatal shooting of 34-year-old David Lopez, according to the Cook County state’s attorney’s office.

Police surveillance footage shows that Encarnacion and Chavez walked from Satan Disciples territory into Latin Kings territory with two other men and approached Lopez, whom they did not know, as he stood behind a retractable steel gate in the backyard of a home, prosecutors said.

Chavez beckoned Lopez to the gate and asked him for a cigarette, while Encarnacion threw up gang signs for the Latin Kings and addressed Lopez as "king," prosecutors said.

Encarnacion also tried to do a "King handshake" with Lopez, prosecutors said, but Lopez just nodded and said "cool."

When one of the other men tried to shake hands with Lopez, Lopez said something in return, and Encarnacion reached through the gate and shoved Lopez in the face, prosecutors said. The other man then pulled out a gun and shot Lopez once in the face, then eight more times in the chest as he laid on the ground.

After the shooting, Chavez and the shooter ducked into a nearby gangway in the 2600 block of West 23rd Place, prosecutors said.

An officer who saw them running into the home identified them as suspects after hearing their description over police radio, sparking a standoff that resulted in Chavez’s arrest when he tried to run out to the alley behind the building.

The alleged shooter was not found in the home and has not been taken into custody, prosecutors said.

Encarnacion was arrested Monday after being identified through video and other means as one of the suspects, prosecutors said.

Footage of the shooting was leaked to several media outlets Sunday night, although it was quickly taken down by Twitter.

Chavez and Encarnacion were both ordered held without bail Wednesday. They are due back in court Feb. 16.