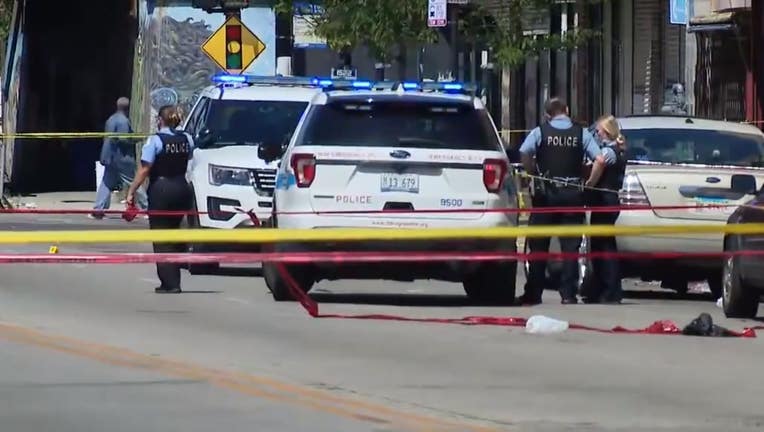 CHICAGO - Twenty-one people were wounded Wednesday in shootings across Chicago. It is the third time in four days that more than 20 people have been shot in the city.

Six people were hurt in one attack in Gresham on the South Side.

The group was outside about 11:30 p.m. at “a large gathering” in the 8500 block of South Parnell Avenue when someone fired shots, Chicago police said.

Three other victims were all in fair condition at the University of Chicago Medical Center, police said. A 17-year-old boy was grazed in the head, while two men, 21 and 29, were struck in the back and leg, respectively. Another man, 28, was shot in the arm and taken to St. Bernard Hospital, where he was also in fair condition.

A 9-year-old boy and his 27-year-old mother were shot and wounded Wednesday afternoon on the West Side.

A 9-year-old boy and his mother were critically wounded in a shooting Wednesday afternoon in Austin on the West Side.

The two were on a sidewalk about 1:15 p.m. in the 300 block of North Central Avenue when two gunmen exited a vehicle and opened fire, according to police.

The boy and his 27-year-old mother, both shot in the back, were taken to Stroger Hospital in critical con128703dition, CPD Supt. David Brown told reporters at the scene. The shooters were aiming at a group of men on a corner, Brown said; the mother and child were not the intended targets, he added, calling the act “cowardly.”

The day’s latest reported shooting left a man wounded in Bronzeville on the South Side.

The man, 21, was outside arguing with a man that he knew about 11:55 p.m. in the 2900 block of South Federal Street, Chicago police said. The other man fired shots and struck the 21-year-old in the hand.

The 21-year-old was taken to Northwestern Memorial Hospital in fair condition, police said.

Earlier in the evening, two people were shot in Chatham on the South Side.

An 18-year-old man was walking about 8:30 p.m. in the 7700 block of South St. Lawrence Avenue when he heard shots, ran and felt pain, Chicago police said. He was struck in the head and taken to the University of Chicago Medical Center in good condition.

Later, another person was dropped off in a vehicle at the same hospital with two gunshot wounds to the back, police said. They were listed in critical condition.

Two more people were shot Wednesday afternoon in Roseland on the South Side.

They were on the front porch of a home about 3:57 p.m. in the first block of East 102nd Place when a vehicle pulled up and someone fired shots, Chicago police said.

Wednesday morning, two people were shot in Park Manor on the South Side.

They were standing outside at 9:09 a.m. in the 7400 block of South Saint Lawrence Avenue when a gold sedan pulled up, Chicago police said. Three people got out and started shooting.

A 19-year-old man was shot in his left foot, right arm and right knee, police said. The other man, 25, was hit in the left arm and upper right thigh and may have suffered a graze wound to his forehead. Both were taken to the University of Chicago Medical Center in good condition.

The day’s first reported shooting left two men hurt in Back of the Yards on the South Side.

The men, 23 and 37, were outside with a group about 12:35 a.m. in the 5100 block of South Wood Street when someone in a green SUV pulled up and opened fire, Chicago police said.

The older man was struck in the chest and thigh and taken to Holy Cross Hospital in critical condition, police said. The younger man was shot twice in the left leg and drove himself to the University of Chicago Medical Center, where he was in good condition.