A 9-year-old boy and his 27-year-old mother were shot and wounded Wednesday afternoon on the West Side.

CHICAGO - A 9-year-old boy and his 27-year-old mother were shot and wounded Wednesday afternoon on the West Side.

The two were on a sidewalk about 1:15 p.m. in the 300 block of North Central Avenue in the Austin neighborhood, when two gunmen exited a vehicle and opened fire, according to Chicago police.

The boy and his mother, both shot in the back, were taken to Stroger Hospital in critical condition, CPD Supt. David Brown told reporters at the scene. The shooters were aiming at a group of men on a corner, Brown said. 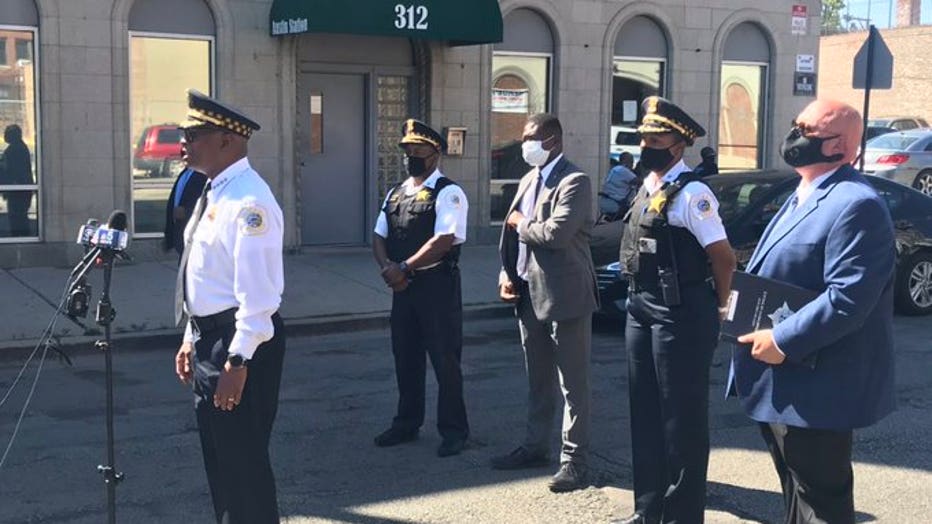 CPD Supt. David Brown speaks to reporters at the scene of a 9-year-old shot in Austin. | Chicago police

The mother and child were not the intended targets, Brown added, calling the act “cowardly.”

After the shooting, the men got back in the dark-colored car and drove north on Central Avenue, police said. No other details on the car were available, Brown said. Video from nearby surveillance cameras is being reviewed, he said.

The incident is the latest in a string of shootings that have killed or wounded young children.

Since June 22, five children 10 years old or younger have died from gun violence in Chicago, according to Sun-Times’ records.

In 2017, a shooting in the same block in Austin left a man dead and five other people wounded. Ald. Chris Taliaferro (29th), a former CPD sergeant, told the Sun-Times that shooting occurred just outside a store known to harbor illegal activities.