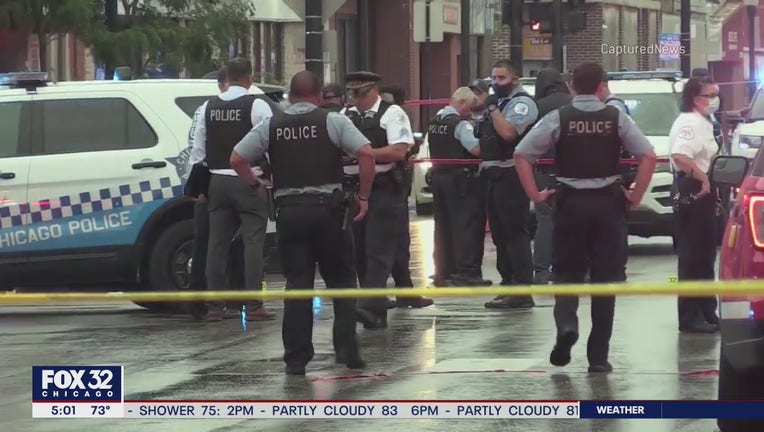 CHICAGO - Twenty-three people were shot, four of them fatally, Tuesday in Chicago.

The day’s most recent reported fatal shooting killed a man and wounded another in West Pullman on the Far South Side.

The younger man was shot in the chest and pronounced dead at the scene, police said. The older man was taken to Christ Medical Center in Oak Lawn with a gunshot wound to the buttocks, and was in fair condition.

A 17-year-old boy was fatally shot in Woodlawn on the South Side.

He was standing on a corner about 1:13 p.m. in the 6500 block of South Maryland Avenue when someone pulled up in a vehicle and fired five to six shots at him, police said.

The teen was struck twice in the chest and taken to the University of Chicago Medical Center, where he was pronounced dead, police said.

That afternoon, a 20-year-old man was shot and killed in West Garfield Park, according to police.

He was shot once in his chest about noon in the 3800 block of West Adams Street, according to preliminary information from police. Multiple shooters allegedly ran from the scene.

Paramedics took the man to Stroger Hospital, where he was pronounced dead, police said.

A 34-year-old man was killed in a drive-by in Riverdale on the Far South Side.

He was walking in the 600 block of East 133rd Street about 12:30 a.m. when someone in a passing black sedan fired shots at him, according to police.

Boris Lilly was rushed to the University of Chicago Medical Center in critical condition, but later died, officials said.

In non-fatal shootings, 15 people were injured in a shooting outside a funeral home in Gresham on the South Side.

At least 14 people shot on Chicago’s South Side after funeral, police say

At least 14 people were injured in a shooting Tuesday outside of a funeral home in Gresham on the South Side.

The shooting happened about 6:30 p.m. as a group of people left a funeral in the 1000 block of West 79th Street, First Deputy Supt. Eric Carter said. Rhodes Funeral Services is located on that block.

People in a black vehicle opened fire on the group as they left the funeral, Carter said. At least one of the funeral attendees started shooting back, and 60 shell casings were found at the scene.

The vehicle crashed after speeding away from the scene, Carter said, and the occupants fled. Police are questioning one person of interest.

Fifteen adults were being treated at five area hospitals, Carter said. Police said their conditions were unknown, while Chicago fire officials said at least 11 of them were listed in serious-to-critical condition.

Police are questioning a person of interest, Carter said.

Two men were shot in a drive-by in East Garfield Park on the West Side.

About 1:40 a.m. the pair, 23 and 25, was standing in the 3600 block of West Garfield Square Drive, when someone in a passing silver-colored Hyundai fired shots at them, police said.

A 16-year-old girl was wounded when she was shot in Chicago Lawn on the South Side.

She was in an alley about 1 p.m. in the 2400 block of West 63rd Street when a male suspect approached her and fired shots, police said.

The girl was struck in the foot and was taken to Holy Cross Hospital in good condition, police said.