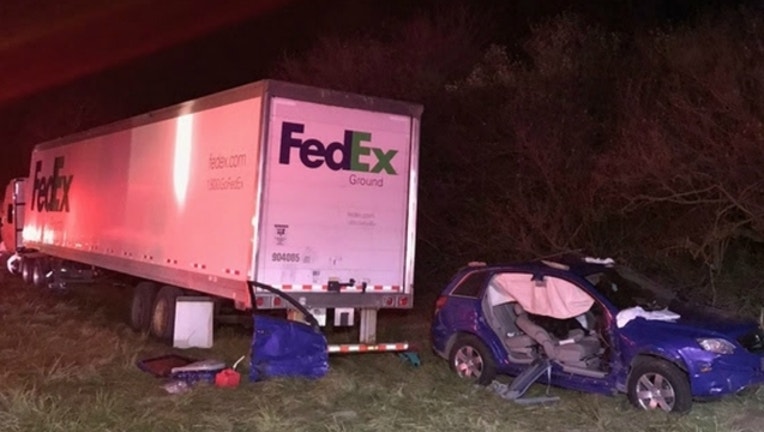 Three people were airlifted to hospitals after a crash late Saturday on I-65 in northwest Indiana. | Indiana State Police

SUN TIMES MEDIA WIRE - Three people, including a 7-year-old boy, were airlifted to hospitals after a crash between a car and a semi truck late Saturday in northwest Indiana.

The crash happened about 11 p.m. on I-65 about three miles north of the Fair Oaks exit, according to Indiana State Police.

A 25-year-old Chicago man was driving a blue 2008 Saturn north on the interstate when the car went off the road to the left and entered the median area, police said. It then traveled back east, crossed across both northbound lanes and was struck by a white 2008 International hauling a FedEx box trailer.

The Saturn spun out and went off the road and into a ditch, police said. The semi also landed in the ditch.

The driver of the Saturn and his two passengers, a 36-year-old Indianapolis woman and a 7-year-old boy, were injured, police said.

The man and woman were airlifted to Christ Medical Center in Oak Lawn with serious injuries, and the boy was initially taken to Franciscan Health Hospital in Rensselaer, then airlifted to Comer Children’s Hospital, police said. His injuries were not believed to be life-threatening.

The semi driver was not injured, police said.

I-65 was closed for about an hour to safely land the two helicopters, police said. It was then reopened to one lane to finish cleanup between 12:30 a.m. and 2 a.m.