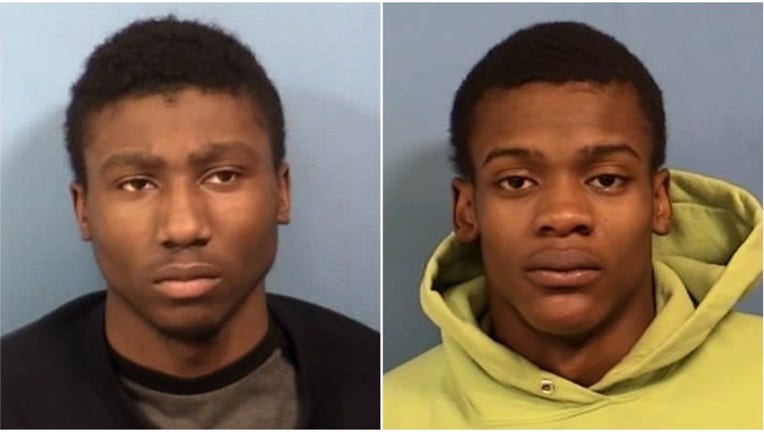 CHICAGO - A 17-year-old boy and two Chicago men are accused of committing a string of armed carjackings in Warrenville and Downers Grove.

Emanuel Embry is charged with two counts of felony aggravated vehicular carjacking and Daysean Washington-Davis is charged with three counts of the same offense, according to the DuPage County state’s attorney’s office. Davis is also charged with one count of possession of a stolen motor vehicle.

The teen is charged with aggravated vehicular hijacking, unlawful use of a weapon and possession of a stolen motor vehicle, all felonies, the state’s attorney’s office said.

On Nov. 30, Downers Grove police responded to a call of a carjacking on Prairie Avenue, prosecutors said. Police allege that a woman and her daughter were sitting in their vehicle when an armed and masked person, later identified as the 17-year-old boy, approached the vehicle, knocked on the window and demanded she give him the car.

The woman threw the keys to the vehicle at him while she and her daughter got out, prosecutors said. The boy then allegedly got into the vehicle and drove away.

About 2 p.m. on Dec. 13, Davis, Embry and the teen followed someone who was driving in Warrenville, prosecutors said. Embry, 19, and the teen approached the driver as he stepped out of his vehicle and walked home.

The pair were allegedly armed and wearing masks, prosecutors said. They allegedly demanded the person’s wallet and vehicle and drove off.

About 20 minutes later, Davis, 19, drove the trio to Hawkins Street in Downers Grove, where Embry and the teen, both armed and wearing masks, allegedly approached a pregnant woman who was sitting in a vehicle in her driveway, prosecutors said. They ordered her out of her vehicle and drove off.

A friend of the woman saw the carjacking take place and followed the stolen vehicle, prosecutors said. The friend approached the vehicle when it was stopped in traffic and Embry and the teen ran out.

The friend got into the stolen vehicle to try and move it off the road, and one of the carjackers jumped into the friend’s vehicle and drove off, prosecutors said.

The teen was arrested Dec. 13, while Embry and Davis were taken into custody Tuesday, prosecutors said.

When they were arrested, Embry was on probation out of Cook County for aggravated unlawful use of weapon and Davis was out on bond for the same offense, prosecutors said. The teen was on probation for a previous robbery.

Embry and Davis were denied bail, and the teen was ordered held in juvenile detention until at least his next court date on Jan. 3.