The children are a 3-month-old baby, a 4-year-old girl, and a 7-year-old boy. Their mother was being questioned by the NYPD.

NEW YORK - A mother of three young children was being questioned by police on Monday after her kids were found unconscious along Brooklyn, New York's famed Coney Island shoreline and later died.

Police believe the children may have been drowned by their mother, sources told FOX 5 New York and the Associated Press. The children were a 3-month-old baby, a 4-year-old girl, and a 7-year-old boy, police said.

New York Police Department officers responded to an apartment at around 1:40 a.m. local time after family members called 911 with concerns that their relative may have harmed her three young children.

Officers went to the apartment but no one answered the door, according to the news outlet. They came across a man in the building who said that he was the father of one of the children. The man also expressed concerns about the safety of the children and told officers that he believed the mother and children were on the boardwalk, police said.

Officers began a search for the woman and children on the boardwalk, beach, and streets of Coney Island. The search lasted about 90 minutes until police got another 911 call directing them to Brighton 6th Street and Riegelmann Boardwalk, where they found the 30-year-old woman but not the children, police said.

The woman was soaking wet and barefoot when they picked her up, according to authorities.

The NYPD said that is when the search was intensified, including aviation units and harbor units. They found the children on the beach near 35th Street, about 2 miles down the boardwalk from where they found their mother.

Crews immediately began CPR on the children. EMS rushed them to Coney Island Hospital, where they were pronounced dead. Their exact causes of death were not immediately released. 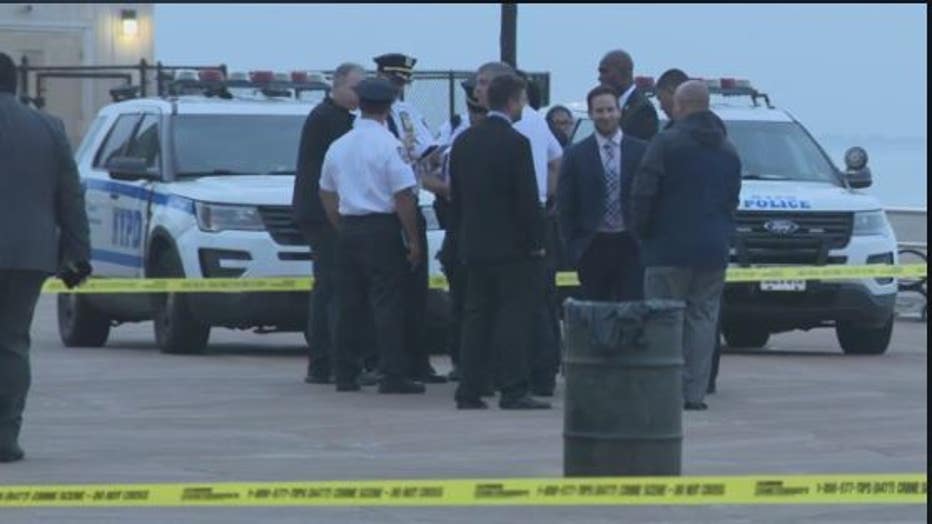 Authorities are pictured gathered at the scene on Sept. 12, 2022, along the Coney Island beach. (Credit: FOX 5 New York)

At a news conference on Monday morning, NYPD Chief of Department Kenneth Corey said the woman was being questioned by detectives at the local police precinct house.

"So far, she’s not said anything," Corey told reporters.

Police didn't immediately identify the children or the mother. A decision hadn't been made about what criminal charges she might face.

Police were asking for any witnesses to come forward.

FOX 5 New York and the Associated Press contributed to this story.