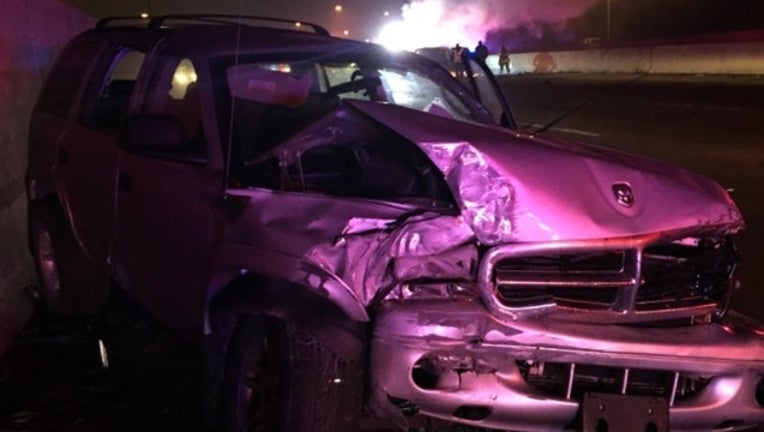 Three people were injured in a fiery crash early Saturday on I-80/94 in Gary, Indiana. | Indiana State Police

GARY, Ind. (Sun-Times Media Wire) - Three people were injured in a fiery crash early Saturday on I-80/94 in northwest Indiana.

A blue 2007 Dodge, driven by a 34-year-old Gary man, went off the roadway to the left of the eastbound lanes of I-80/94 near Cline Avenue and rear-ended a 2004 Ford Explorer, which had stopped on the shoulder with a flat tire and had its emergency lights activated, according to a statement from Indiana State Police.

A 21-year-old man from Gary was sitting in the passenger seat of the Explorer at the time of the crash, police said. The driver had been picked up by an acquaintance to go get a new tire.

A gray 2002 Dodge Durango driving in the left lane also struck the Explorer with its front driver side, then crossed all lanes and crashed into the outer concrete barrier wall, police said. Both the Explorer and Dodge came to rest in the far right lane.

The Explorer and blue Dodge both caught fire and became fully engulfed after the crash.

Good Samaritans helped the 34-year-old man get out of his vehicle, police said. That driver, as well the man sitting in the parked Explorer and the 25-year-old Gary woman driving the Durango, were all taken to North Lake Methodist Hospital in Gary with non-life-threatening injuries.

Everyone was wearing their seat belts and neither alcohol nor drugs are thought to have played a role in the crash, police said. All lanes were open to traffic by 4:46 a.m.