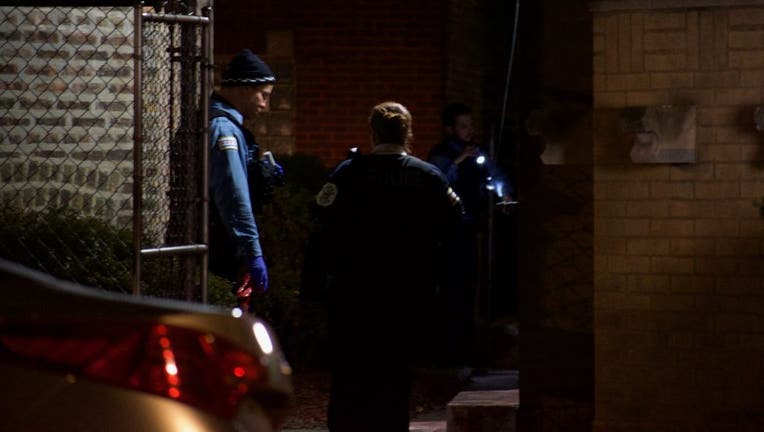 Police investigate the scene where two teens were shot Feb. 3, 2020, in the 7900 block of South Paxton Avenue in South Chicago. | Carly Behm/Sun-Times

CHICAGO - Three people were killed and 19 others, including a Chicago firefighter, were wounded in citywide shootings over the weekend.

The weekend’s latest fatal shooting left a 15-year-old boy dead in West Englewood on the South Side.

Marlin Gaines was in the 5600 block of South Marshfield Avenue before 4 p.m. when three males jumped out of a white SUV and attacked him, Chicago police and the Cook County medical examiner’s office said. One of the males then pulled out a gun and shot the boy multiple times before fleeing west on 56th Street. He was taken to Comer Children’s Hospital, where he succumbed to his injuries.

Police said private video footage may have captured the incident.

Early Sunday morning, a man was killed and a woman was wounded in a shooting in Little Village on the South Side.

The pair were riding in the back seat of a southbound vehicle at 2:56 a.m. in the 3100 block of South California Avenue when a dark-colored SUV pulled alongside them at a red light, according to police. Someone in the SUV opened fire before it fled eastbound on 31st Street.

The driver of the victims’ vehicle took them to Saint Anthony Hospital. The man, 23-year-old Luis Maldonado, was shot in the side, back and leg and pronounced dead, police and the medical examiner’s office said. The woman, 20, was shot in the hip and was listed in fair condition.

Another man was shot to death several hours earlier in the same neighborhood.

Eduardo A. Garcia, 20, was standing on the street at 11:37 p.m. Saturday when someone shot at him from a black sedan in the 2200 block of South Whipple Street, police and the medical examiner’s office said. Garcia, who lived in Little Village, was hit multiple times and driven by friends to Mount Sinai Hospital, where he was pronounced dead at 11:50 p.m.

An autopsy conducted Sunday confirmed he died of his gunshot wounds, the medical examiner’s office said. His death has been ruled a homicide.

In non-fatal shootings, a firefighter was injured early Sunday while responding to a car fire in Albany Park on the Northwest Side.

The 36-year-old firefighter was at the scene of the car fire at 1:02 a.m. in the 3300 block of West Wilson Avenue when someone fired shots and hit him in the leg, according to Chicago police and fire officials. He was taken to Illinois Masonic Medical Center in fair condition.

The boys, 16 and 17, were in a gangway about 1:13 a.m. in the 7900 block of South Paxton Avenue when older black SUV drove up, police said. Someone got out of the SUV and shot at the teens before driving off. The 17-year-old was shot in the hand and the 16-year-old was hit in the arm. Both were taken to South Shore Hospital in good condition.

Another teen was shot Sunday night in Edgewater Beach on the North Side.

The 17-year-old was walking about 9:50 p.m. when a male approached him in the 1000 block of West Berwyn Avenue, shouted a gang slogan and opened fire, police said. He was taken to Illinois Masonic Medical Center in serious condition, while the shooter fled on foot.

Another man was wounded in a shooting Sunday morning on the Dan Ryan Expressway in Englewood on the South Side.

Illinois State Police troopers were called about 2:55 a.m. for reports of a crash on southbound I-94 near 63rd Street, state police said. They arrived to find a man with a gunshot wound inside the vehicle. He was taken to the University of Chicago Medical Center, but his exact age and condition were not immediately known.

Half an hour before that, a woman was shot and critically hurt while driving in West Rogers Park on the North Side.

The 35-year-old was driving a vehicle with a relative in the passenger seat about 2:25 a.m. when a silver Mercedes pulled alongside them in the 2400 block of West Granville Avenue, according to police. A male in the Mercedes fired multiple shots, hitting the woman in the back and grazing her left arm. The family member drove her to Saint Francis Hospital in Evanston, where she was listed in critical condition.

On Saturday morning, two men were shot in East Garfield Park on the West Side.

The weekend’s first shooting grazed a man Friday evening in Gresham on the South Side.

The 19-year-old was walking at 5:57 p.m. in the 1100 block of West 88th Street when he heard gunfire and felt pain, according to police. He was taken to Christ Medical Center in Oak Lawn with a graze wound to the back and his condition was stabilized.

Nine other people were wounded by gunfire across Chicago between 5 p.m. Friday and 5 a.m. Monday.

Last weekend, two people were killed and 14 were injured in shootings within the city limits.