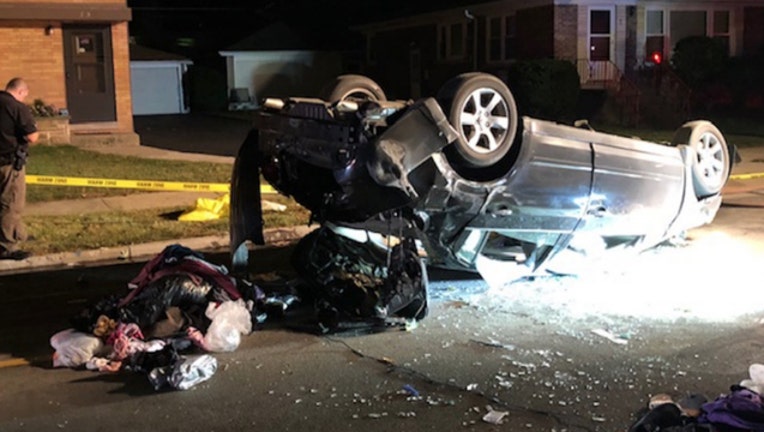 RIVERSIDE (Sun-Times Media Wire) - Four people have been charged in connection with an armed robbery earlier this week in west suburban Riverside.

Terance A. Edwards, 26, of County Club Hills and a 17-year-old boy from Homewood were each charged with armed robbery in connection with the incident, according to Riverside police. The 17-year-old was not identified by police because he is a juvenile.

Christopher Greene, 18, of Matteson, and 19-year-old Gianaurre Shaviss of Flossmoor, were turned over the FBI and charged with bank robbery, according to police and a criminal complaint filed Thursday in U.S. District Court.

About 9:30 p.m. Monday, officers responded to the armed robbery at the ATM outside of the Bank of America branch at 3300 S. Harlem Ave., police said. An employee was servicing the ATM when he was approached by the group and asked, “Is that money worth your life?”

The employee replied, “No,” and he was held to the ground during the robbery, police said. The robbers made off with $8,000. They took off in a car, but were spotted by a Riverside officer who stopped the vehicle at Delaplaine Road and Burlington Street. When the officer approached, they drove off again. During the pursuit, which lasted about 90 seconds, shots were fired in the direction of officers before the getaway vehicle crashed, rolled and caught fire.

Some of the people in the car were thrown from the vehicle in the crash, police said. Six people were taken into custody and taken to hospitals for treatment. A .40-caliber handgun, two 9 mm handguns, ammunition and spent shell casings were recovered at the scene.

Police said $7,740 of the cash has been recovered from vehicle and in the 100 and 200 blocks of East Burlington Street, where some of the cash went “flying out the window” of the fleeing vehicle.

The Cook County state’s attorney’s office declined to press charges against two of the people involved: an 18-year-old woman from Chicago Heights and 18-year-old man from Homewood, police said. In March, the woman was reported as a missing endangered person in California. Authorities in the state were contacted by Riverside police about their missing persons case.

Riverside Police Chief Tom Weitzel described the investigation as “extremely taxing” for the department in a statement Thursday, saying: “At one time or another during this three-day investigation, every single Riverside police officer worked some aspect of this case by assisting in the investigation, guarding prisoners, collecting evidence, searching for video, or street coverage because manpower was being utilized toward this investigation.”

He also praised his officers for their actions following the crash, which included putting out the car fire and pulling two people from the getaway vehicle to safety.

Illinois State Police will conduct ballistics testing on the recovered casings with the handguns that were found. The results were still pending Thursday. Riverside officer did not return fire during the incident, police said. No officers were hurt.

Judge Geary W. Kull set Edwards’ bail at $75,000 during a hearing Thursday, according to Cook County court records. His next court date was scheduled for Oct. 22.