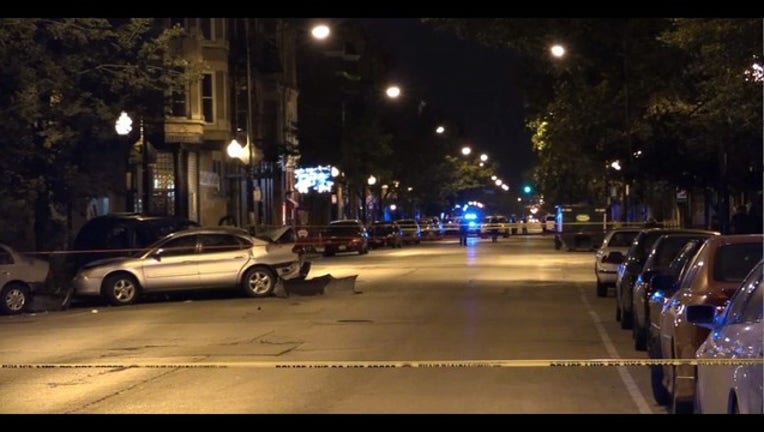 CHICAGO (Sun-Times Media Wire) - Four men were killed and at least 53 other people — including a 10-year-old girl — were wounded in shootings across Chicago between late Friday afternoon and Monday morning.

The latest homicide happened Sunday afternoon in the North Lawndale neighborhood on the West Side.

About 3 p.m., Quinton Dgoins, 25, was inside a car in the 3900 block of West Roosevelt Road when another car drove by and people from inside both cars began shooting at each other, according to Chicago Police and the Cook County medical examiner’s office.

Dgoins, of the 3000 block of West Flournoy Street, was shot in the back and shoulder and taken to Mount Sinai where he was pronounced dead at 2:42 p.m., authorities said.

Earlier Sunday, a man was shot to death in the Longwood Manor neighborhood on the South Side.

Marcus Cox, 28, was standing outside about 4:20 a.m. in the 9600 block of South Morgan when someone fired shots in his direction, striking him in the abdomen, authorities said.

Cox, who lived on the same block as the shooting, was taken to Advocate Christ Medical Center in Oak Lawn, where he was pronounced dead at 3:19 p.m., the medical examiner’s office said.

About an hour earlier, a man was gunned down in the Pilsen neighborhood on the Lower West Side.

Abraham Barrera, 23, and another man, 24, were driving in the 1100 block of West 18th Street about 3:20 a.m. when someone walked out of an alley and opened fire, authorities said. Both were shot in the head.

Investigators think the shooting was gang-related.

The weekend’s first fatal shooting happened in a Bronzeville neighborhood apartment complex Saturday on the South Side.

About noon, a 25-year-old man was arguing with a 34-year-old man inside the apartment in the 700 block of East 47th Street when the older man opened fire, police said.

The younger man suffered three gunshot wounds and was taken to Stroger, where he was pronounced dead at 12:43 p.m., authorities said. Officials withheld his name Sunday.

Police identified the shooter as Marvin Lee. He initially called for help saying the other man had broken into his home, but detectives determined they knew each other and had an altercation prior to the shooting.

Lee, who lives on the block where the shooting happened, was charged with first-degree murder and was ordered held without bond Sunday. He is next scheduled to appear in court Monday.

In the most recent non-fatal shooting, two men were shot early Monday in the Belmont Cragin neighborhood, prompting a brief police chase on the Northwest Side.

The two men, ages 28 and 30, were both shot at 2:53 a.m. during argument with someone outside in the 5700 block of West Grand, police said. The 28-year-old was shot in the abdomen and was taken to Stroger Hospital, where his condition was stabilized, police said. The older man suffered multiple gunshot wounds to the back and was taken in serious condition to Loyola University Medical Center.

When officers responded to the scene of the shooting, a male ran away and a foot chase ensued, police said. Shots were fired from police officers in the 2700 block of North Major, but no one was struck and the suspect was subsequently taken into custody. A weapon was recovered and charges were pending early Monday, police said.

About midnight Monday, a man was shot in the West Elsdon neighborhood on the Southwest Side. The 23-year-old was standing outside in the 4000 block of West 55th Street when he heard gunfire and realized he’d been shot in the right thigh. He walked into Rush University Medical Center and was later transferred to Stroger Hospital, police said. His condition was stabilized.

Less than an hour earlier, a man was injured in a drive-by shooting in the West Side Austin neighborhood. About 11:20 p.m. Sunday, the 21-year-old was standing on the corner in the 5000 block of West Division when a vehicle drove by and someone inside fired shots, police said. He was shot in the hip and was taken to Mount Sinai Hospital, where his condition was stabilized. A police source said the man is a documented gang member.

About 10:40 p.m. Sunday, four people were wounded in a drive-by attack about in the Back of the Yards neighborhood on the South Side. Three men and a woman were standing outside on the sidewalk in the 5200 block of South Justine Street about 10:40 p.m. when a light-colored SUV drove by and someone inside opened fire, police said. A 30-year-old man suffered a gunshot wound to the groin, a 33-year-old man suffered a gunshot wound to the thigh and hip area, and a 35-year-old man was shot in the leg and hip. All three of them were taken to Stroger Hospital in serious condition, police said. A 29-year-old woman suffered a graze wound to the shoulder, and was taken to Mercy Hospital and Medical Center in good condition.

Less than 30 minutes earlier, a man was shot in the heart of Humboldt Park in the West Side neighborhood. The 50-year-old man was shot in the leg in the 1300 block of Luis Munoz Marin Drive when he tried breaking up a fight between two people, police said. That block runs through the park, between Division and Augusta, Kedzie and Sacramento. The suspect ran away after the shooting. The man was taken to Mount Sinai Hospital where his condition was stabilized, police said.

Earlier Sunday afternoon, a 10-year-old girl was among three people shot in the Woodlawn neighborhood on the South Side.

A bullet grazed the girl’s neck and she was taken in good condition to Comer Children’s Hospital, police said. The man was shot in the back and taken to Northwestern Memorial Hospital in critical condition. The woman suffered a graze wound to the calf was taken to University of Chicago Medical Center, where her condition was stabilized. Police said the woman and girl were not the intended targets.

Additionally, a Chicago Police officer shot and killed a man who charged at officers with a sharp object about 9 p.m. in Humboldt Park’s 900 block of North Central Park, officials said.