The earthquake happened at 5:26 p.m. EST, with its epicenter around 2.5 miles from Indios on the island’s southern coast, the USGS reported.

Friday’s temblor also comes days after the island was hit by a 5.8 magnitude earthquake on Jan. 6 and a 6.4 magnitude one day later.

Hundreds of thousands of Puerto Ricans are still without power and water, and thousands are staying in shelters and sleeping on sidewalks since Tuesday’s earthquake. 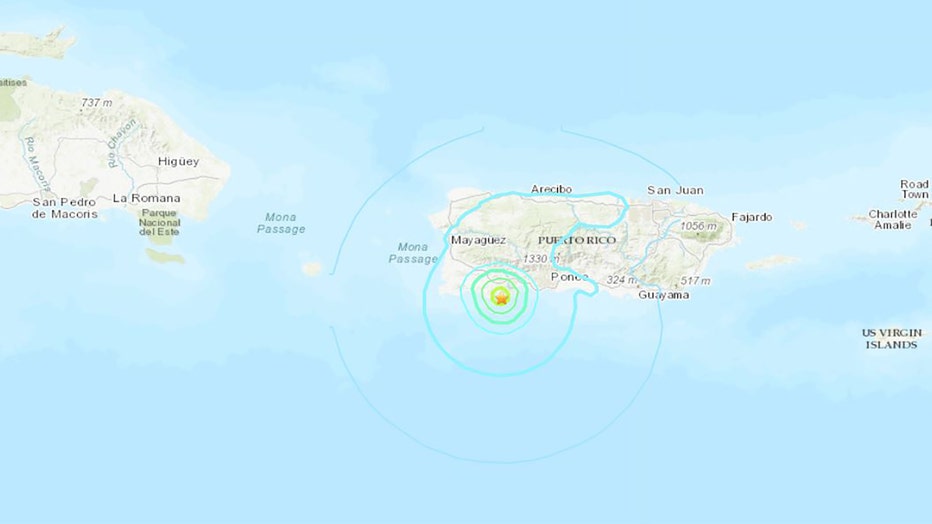 The tremor killed one person, injured nine others and damaged or destroyed hundreds of homes and several schools and businesses in the island’s southwest region.

The unusual seismic activity and strong aftershocks have delayed recovery efforts, caused a spike in people staying in government shelters like the one in Guayanilla and unleashed panic among thousands of Puerto Ricans.

“I've reached the point where I'm getting on my knees in the street to pray, and I'm even listening to Christian music,” said Irma Vega, a 45-year-old caretaker for the elderly. “It's been 20 years since I've worshipped."

Another aftershock of 4.36-magnitude hit before dawn, causing people in the shelter to yell, “It's shaking! It's shaking!” as some sat upright in their cots. The quakes have also damaged government buildings, including a maximum security prison in the nearby southern coastal city of Ponce, where officials relocated nearly 200 inmates for their safety.

The ground in southwest Puerto Rico has been shaking since Dec. 28, with more than 1,100 earthquakes, of which 96 have been felt and 66 were of a magnitude 3.5 or greater, according to the island's Seismic Network.

Gavin Hayes, with the U.S. Geological Survey, said the most likely scenario is that aftershocks will continue to decrease in frequency for the next 30 days.

Meanwhile, government officials are trying to calm and distract people by turning some shelters into a makeshift community. At the baseball park in Guayanilla late Thursday night — the town’s largest one — volunteers played the movie “Dinosaur,” for a dozen small children who sat enraptured and cross-legged as generators roared in the background and the elderly nestled under blankets in the chilly air and tried to sleep.

Carmen Orengo, a 67-year-old shelter refugee, had a blue tarp her home for a year after Hurricane Maria hit Puerto Rico in September 2017 as a Category 4 storm, which killed an estimated 2,975 people in the aftermath and causing more than an estimated $100 billion in damage.

“I lost everything in the hurricane,” she said as she paused and sighed: “Only to go through the same thing again.”