A 5-month-old girl has died after being shot in the head Friday night in Chicago's South Shore neighborhood, according to police and sources.

CHICAGO - A 5-month-old girl has died after being shot in the head Friday night in Chicago's South Shore neighborhood, according to police.

Police said the infant was inside a vehicle when an unknown vehicle approached. Someone inside the unknown vehicle fired shots and the 5-month-old was struck in the head. She was rushed to Comer Children’s Hospital, where she died as a result of her injuries. 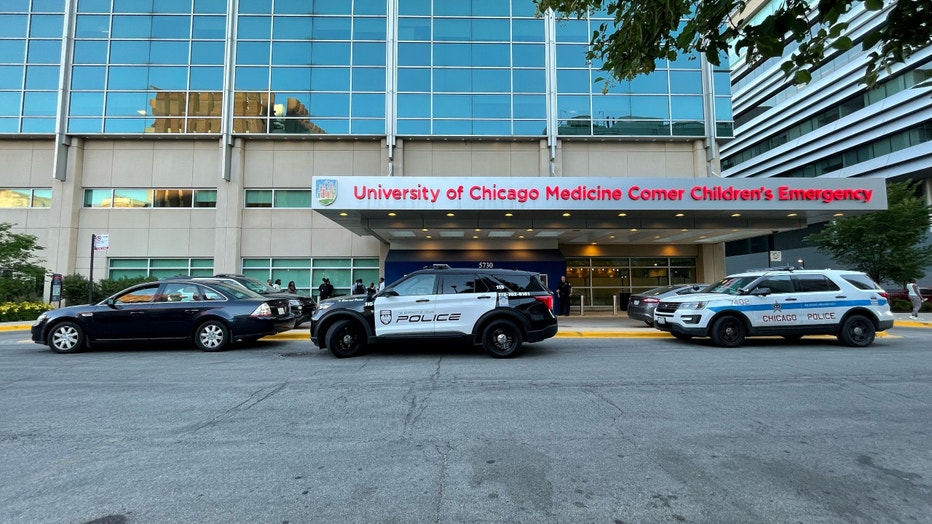 A baby was taken to Comer Children's Hospital Friday night after being shot in South Shore.

At the hospital, emotions ran high Friday night as the baby’s loved ones gathered outside.

Police said a 41-year-old man was also shot during the incident. He was traveling in a separate vehicle and suffered a gunshot wound to the eye area. He self-transported to the University of Chicago Medical Center and was initially reported in good condition.

There are no offenders in custody and area detectives are investigating.

Police have not confirmed who they are looking for, but crisis responder and community activist Andrew Holmes said the suspect vehicle is possibly a red Chrysler.

"And it’s supposed to have been a female shooter, and my message to her, it won’t be long because I hope one of these cameras or somebody got her information and knows how she looks. You just took this baby’s life. This baby was an infant, this baby didn’t do nothing to you. We understand it may have been two cars shooting back and forth at each other. We’re not going to stand for this in this city," said Holmes. "We need this city to do what we got to do to put eyes on this young lady, on this driver until both of them have been arrested because this is disgusting, this is a disgrace, this is as low as you can get. And that bullet went through the back of that car and hit this baby in the head."

Chicago mayoral candidate and community activist Ja'Mal Green is offering a $5,000 reward for information that leads to the arrest and conviction of the gunman.

"A 5-month-old girl was just shot in the head in Chicago. My heart breaks for this young girl & her family. I am offering a $5,000 reward NOW to someone who comes forward to give answers that can lead to an arrest & conviction! $2,500 when they are arrested, $2,500 when convicted. It’s time to get to the root of this violence so we can create a better city for our Children," Green said in a statement.