In less than 24 hours, there is another mass shooting in Chicago; around noon, four men and one woman got shot.

CHICAGO - Five people were shot Wednesday afternoon in the Gresham neighborhood on the South Side.

The group was on a sidewalk near a food mart at 79th and Justine streets when a silver car pulled out of an alley and three gunmen got out shortly after noon, Chicago police spokeswoman Michelle Tannehill said.

The trio opened fire, striking four men and a woman, she said.

The shooting occurred across the street from the Target DevCorp Auburn Gresham Community Outreach Center, an anti-violence organization.

Autry Phillips, executive director of Target DevCorp, said his team was just starting their shift when the shooting happened.

He said the spot where the people were shot is a "hangout for individuals that don’t work or that’s off work and just needed to blow off some steam so they’re coming outside. It’s a nice day, why not come outside and hang out on the block?"

He said the victims are not gang members and were not hurting anyone. "Unfortunately someone made the decision to pull the trigger," he said. 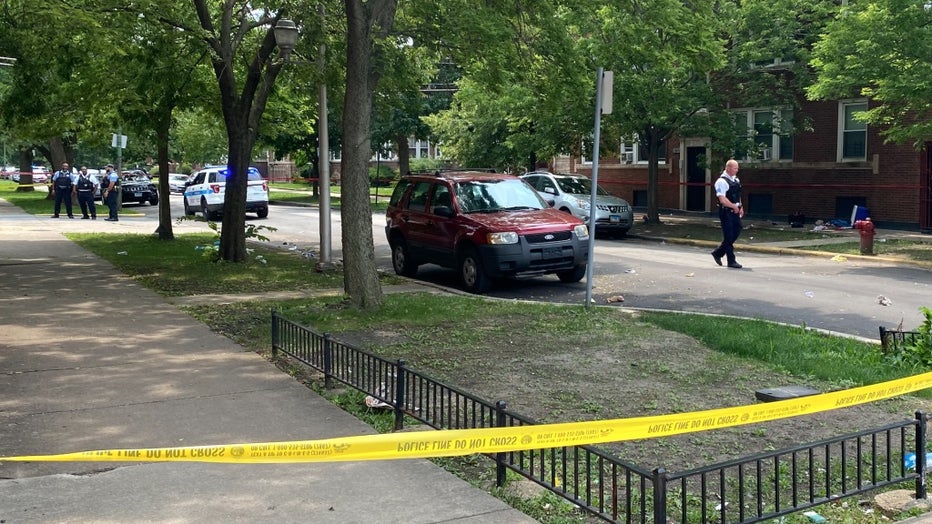 Police investigate at the site of a mass shooting Wednesday, July 14 in the 7800 block of South Bishop Street. | Manny Camarillo/Sun-Times

Phillips said his team was now working in the community to prevent any retaliation. "What we try to do first to to try to make sure the families are okay."

Over the last five years, Chicago has recorded the most mass shootings in the nation by far, according to data compiled by the Gun Violence Archive.

"Mass shootings are becoming the norm," said the Rev. Michael Pfleger, a longtime crusader against gun violence whose church, St. Sabina, is just a half-mile from the Gresham attack.

Pfleger said he doesn’t believe the victims of the shooting were the intended targets, noting they’re fixtures of that area who often hang out there playing cards. An infant was sitting in a stroller nearby but wasn’t struck, he said.

"It’s an area that’s known by a particular gang and I think whoever it was, they’re sending a message to that area," he said. "And these people just happened to be sitting there and there was nobody else out there."

It was the second mass shooting, with four or more victims, that took place in Chicago on Wednesday.

Five others were shot around 2:14 a.m. in the West Garfield Park neighborhood.

There have been at least 31 shootings this year involving four or more victims, according to a Sun-Times analysis.

The largest mass shooting this year, and among the largest in recent memory, wounded 15 people, two fatally, during a party in the Park Manor neighborhood. A fight broke out between several people attending the party March 14 in the 6700 block of South South Chicago Avenue when gunfire erupted, police said then. Fifteen people were struck, ranging in age from 20 to 44 years old.

In July 2020, 15 people were shot outside a Gresham funeral home, but none of the victims died.

Pfleger said Chicago doesn’t appear to have a comprehensive plan to address the violence plaguing the South and West sides. Meanwhile, the toll continues to grow.

"We’re burying dreams every week," he said. "And we’re less of a city because of who we’ve lost in this city. And I don’t see anything changing."