CHICAGO - David Brown wasn’t even sworn in yet as Chicago police superintendent when he got an email from the mayor troubled by an internal report documenting the high cost of police chases and crashes.

"In the last 5 years, the city has paid out almost $50 million in litigation related to police pursuits, and this does not account for damage to police vehicles, lost time due to injuries on duty, etc.," Mayor Lori Lightfoot wrote Brown on April 16 last year, about a week before his swearing-in.

"So, I pay close attention to pursuits when I see them," she added. "This is another area that must be fixed."

Two-thirds of the 270 police chases in 2019 — a total of 180 — ended in crashes and eight people died, according to a "pursuit litigation analysis" prepared for Lightfoot and marked "confidential."

Supervisors ordered chases to be terminated in 112 of those pursuits, yet half of them still ended in crashes, the report found. One caused the death of a bystander.

Details of the report are included in a trove of hacked City Hall emails belonging to several of Lightfoot’s closest advisors. They show the mayor keeping a close watch on police pursuits and, in at least one instance, asking if the city was liable to get sued.

In one email from October 2019, Lightfoot mentions the latest overnight pursuit crash to her corporation counsel Mark Flessner, who responds, "These accidents are daily. Can we incentivize for accident-free days?"

Yet it was nearly a year before Chicago’s policy on pursuits was finally changed — after a horrific crash on the North Side that killed Guadalupe Francisco-Martinez, a mother of six, and injured five others. 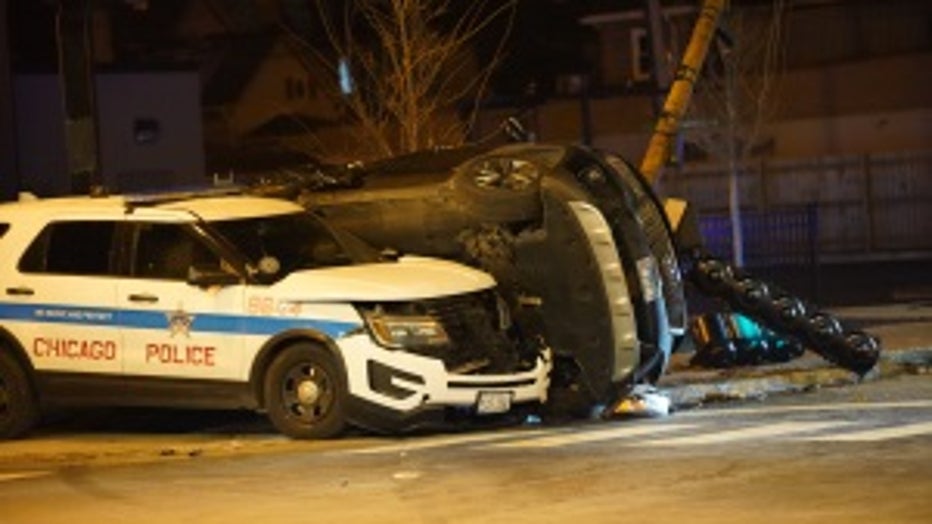 The wreckage of a crash between a Chicago police cruiser and a Kia sedan at the corner of Lawrence and Central avenues Dec. 18, 2019. | Sam Kelly/Sun-Times

In that crash last June, officers had been told at least four times to stop chasing a suspect before a police car T-boned Francisco-Martinez’s SUV. Her family said she was on her way home from work, and had just picked up pizza for her daughter. The pursuit spanned 30 miles across Chicago and ended in Bridgeport.

Two months later, a new policy went into effect clarifying language on how supervisors should conduct a "balancing test," weighing the risk of a chase against the risk of letting someone escape.

The policy also mandated that marked police cars take the lead in chases, and that lights and sirens always be used.

It’s unclear if the new policy has worked because the Chicago Police Department and the mayor’s office have not released any new data on pursuits. In a statement for this story, City Hall spokesman Alexander Murphy said Lightfoot’s office would not comment on information made public from the hacked emails.

It’s also unknown if police officers followed the new policy in the last month’s harrowing pursuit of a suspect in the fatal shooting of 7-year-old Jaslyn Adams. 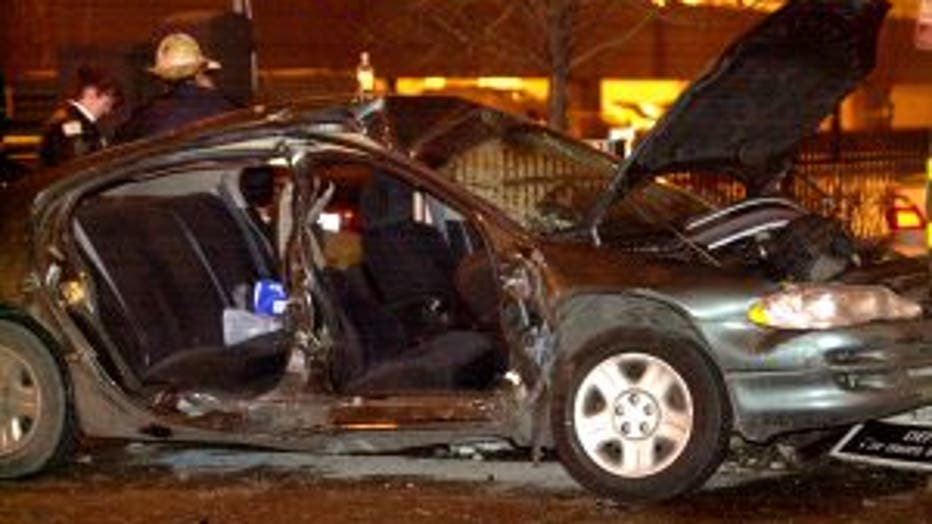 One of the cars that crashed at the intersection of Madison and Des Plaines streets after a police pursuit in January 2003. Pedestrian Qing Chang was killed in the incident. | Sun-Times file

Undercover officers on surveillance began to chase the suspect in west suburban Lombard onto the Eisenhower Expressway, where the suspect crashed and then allegedly tried to carjack a family at gunpoint. Police shot the 18-year-old before he could take off in the car with two small children in the back seat.

Chicago has revised its chase policy several times over the last two decades in an attempt to reduce crashes.

In 2003, the policy underwent major changes after a sergeant kept chasing a wallet thief who struck and killed a pedestrian, Qing Chang, and her unborn child in the West Loop. Another sergeant had told him over the radio to end the chase but he continued it, citing his rank.

The city later paid Chang’s husband a $17.5 million judgement. It also updated the pursuit policy, banning officers from initiating a chase for a minor traffic infraction, such as a broken headlight, and introducing the "balancing test."

In 2016, the policy was revised to require all chases be approved by a supervisor. A month before Lightfoot was sworn in, the police department again updated the policy to prohibit chases where the most serious offense was possession of a stolen vehicle.

A 2017 U.S. Justice Department report found that an average of 355 people died annually in police chases across the country between 1996 and 2015 — a rate of nearly one per day. One-third of those killed were either pedestrians or motorists not involved in the chase. Yet only 2% of local police departments and 1% of sheriffs’ offices prohibited vehicle pursuits. No state police or highway patrol agencies prohibited pursuits.

But even pursuits that are immediately terminated can still turn fatal.

In September, Lightfoot claimed that a South Side crash that killed 10-year-old Da’Karia Spicer was not a police pursuit because officers had ended the chase shortly after trying to pull over a driver for a traffic violation. 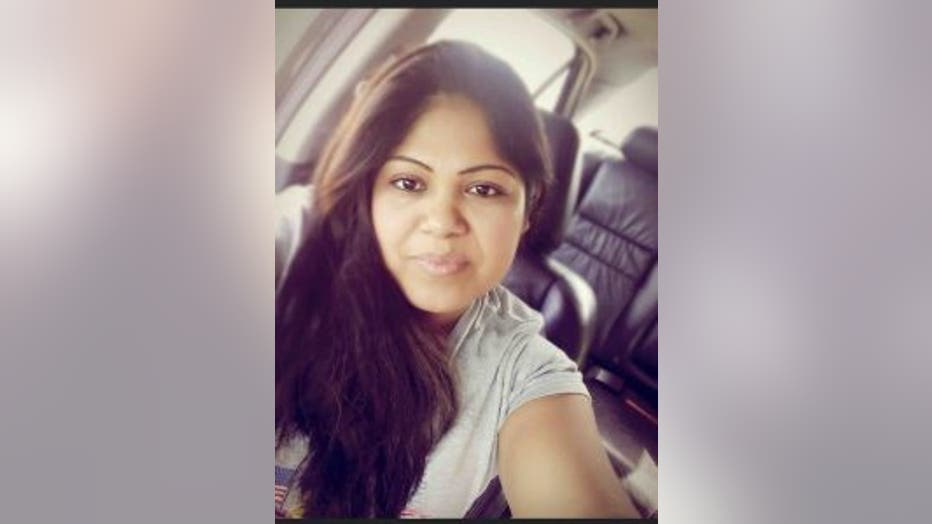 Guadalupe Francisco-Martinez was killed June 3, 2020, when a police squad car slammed into her vehicle during a police pursuit that spanned 30 miles across Chicago. | GoFundMe

But the driver continued to speed away and struck two cars at 80th and Halsted streets, killing Da’Karia and seriously injuring her 5-year-old brother.

Lawsuits from Chicago police pursuit crashes account for the largest share of payouts in terms of both settlements and verdicts, according to the city’s Report on Chicago Police Department 2019 Litigation.

More than $6 million in settlements, or 30% of all settlements paid out by Chicago, were for wrongful death lawsuits related to police vehicle pursuits in 2019. And $21 million in verdicts, or 74% of all verdict payouts that year, went to people suing the city in fatal vehicle pursuit cases.

The city spent more than $2 million a year on crash repair costs for police vehicles between 2016 and 2019, according to another email sent to Lightfoot at her request.

Months after implementing the latest update to its pursuit policy, the police department is now working to revamp its foot pursuit policy following the police killings of 13-year-old Adam Toledo and 22-year-old Anthony Alvarez in late March.

The latest monitoring report on a federal consent decree for the department found that 8% of foot pursuits between March 1, 2020 and the end of the year resulted in the use of deadly force. 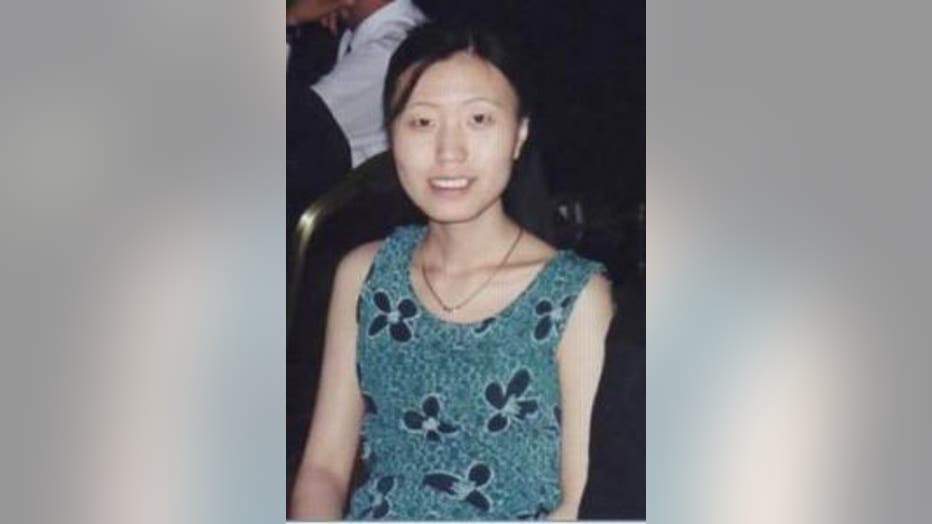 Qing Chang, 25, died in a January 2003 crash while police chased a suspected wallet thief through the West Loop. | Sun-Times files