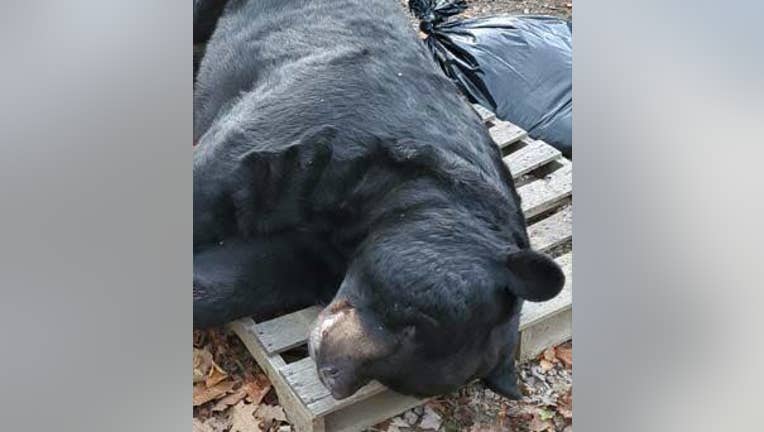 A 700-pound bear shot in New Jersey, pictured, has set a new world record as the largest black bear ever killed with a bow and arrow in North America. (Pope and Young Club)

NEW JERSEY - A bowhunting organization says a 700-pound bear shot in New Jersey last fall has set a world record as the largest black bear killed with a bow and arrow in North America.

The Pope and Young Club, a bowhunting and conservation organization, said the bear killed Oct. 14 in Morris County toppled a record set in 1993 by a hunter in California. The new record was announced after a special panel of judges was assembled Feb. 8 in Harrisburg during the Great American Outdoors Show, the group said.

“It has been an inspiring journey, to say the least,” hunter Jeff Melillo said in a statement quoted by the organization. “New Jersey, my home state, has its first-ever world record animal!”

Club records director Eli Randall said the animal's skull measured over 23 inches and had a bone structure that he called “the heaviest I had ever seen."

“They were spot on, and I never doubted it for one second. I’m very grateful that I get to be a part of all this. Pursuing bears with bow and arrow is a passion of mine,” he said in the organization's release.

The bear, preserved through taxidermy, is to be displayed at the Pope and Young Annual Convention in Virginia in March.

The state's black bear hunt has generated controversy in recent years, with Gov. Phil Murphy vowing during his campaign to seek an end to it and in 2018 instituting a ban on hunting bears on state lands. The New Jersey Sierra Club is still seeking a complete ban.

The hunt was reintroduced in New Jersey in 2003 to control the growing bear population after a nearly three-decade hiatus. A year ago, a state appeals court rejected a challenge to the 2015 expansion of the hunt. A total of 315 bears were killed during last year's hunting periods.