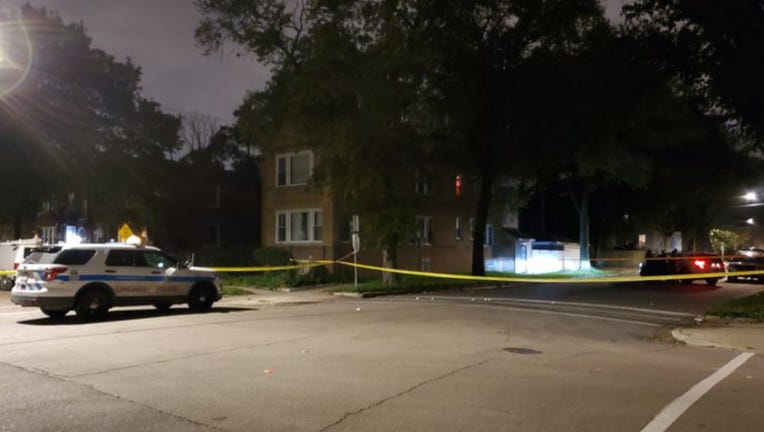 About a dozen shell casings can be seen on Peoria Street near 52nd Street, where a 3-year-old boy was shot in the head Oct. 13, 2019. ( Tyler LaRiviere/Sun-Times )

CHICAGO - Eight people were killed and at least 20 others were wounded in shootings across Chicago this weekend, including five people killed by a neighbor in a Dunning condo on the Northwest Side.

The shooting rampage began about 5:30 p.m. Saturday when the 67-year-old gunman went into his next-door neighbor’s unit on the second floor of the building in the 6700 block of West Irving Park Road in the Dunning neighborhood and fatally shot what Chicago police described as a family of three men and one woman eating supper.

“For reasons we yet don’t know, he opened fire on all four of those individuals, killing them all,” First Deputy Supt. Anthony Riccio said.

The Cook County medical examiner’s office identified one of the victims as Tsvetanka Kostadinova. The identities of the other three have not been released.

The gunman then went to the building’s third floor, where he confronted another resident, who lived there with her family, and shot her, authorities said. She was pronounced dead on Sunday.

All of the victims appeared to be in their 40s and knew the shooter, Riccio said. The gunman turned himself in to authorities without incident after the shooting.

The most recent fatal shooting happened early Sunday in Scottsdale on the Southwest Side.

Terry Gardener Jr., 27, was shot in the chest at 2:18 a.m. in the 8400 block of South Kenneth Avenue, according to police. Witnesses told investigators a vehicle with two males inside drove up and at least one of the occupants fired shots at him. A family member drove the man to Christ Medical Center in Oak Lawn, where he was pronounced dead.

Another man was killed and a woman was injured in a shooting Saturday evening in Grand Crossing on the South Side.

About 6:45 p.m., the man and woman, both 30, were sitting in a vehicle in the 7500 block of South Dobson Avenue when two men approached them and opened fire, police said. The man was struck in the head and pronounced dead at the scene. The woman was struck in the right thigh and taken to the University of Chicago Medical Center in serious condition.

The medical examiner’s office has not released details about the fatality.

In another fatal shooting, 23-year-old Emell Hill was killed in the 8300 block of South Burnham Avenue in South Chicago. He was walking about 7:30 p.m. when a man approached him and fired shots, authorities said.

He was struck in the lower back and taken to the University of Chicago Medical Center, where he was pronounced dead less than an hour later, authorities said.

The latest nonfatal shooting left a 3-year-old boy critically wounded Sunday night on the South Side.

The child was sitting in a parked vehicle with his mother and two other children about 11:40 p.m. in the 5200 block of South Peoria Street when three males walked up and started shooting, police said. The boy was shot in the head and his mother drove to the 5500 block of South Halsted Street, where she flagged down an unmarked Chicago police car.

The child was driven to Comer Children’s Hospital, where he was listed in critical condition, police said.

A woman was shot and wounded Sunday morning in Lawndale on the West Side.

About 5:20 a.m., the 36-year-old was riding in a vehicle in the 2900 block of West Lexington Street when a silver Dodge Charger pulled next to it, according to police. Someone in the Dodge opened fire, hitting the woman in the thigh. She was taken to Mount Sinai Hospital, where her condition was stabilized.

Chicago police investigate the scene where a 3-year-old boy was shot, Sunday night, in the 5500 block of South Halsted. (Tyler LaRiviere/Sun-Times)

A man was hurt and a teenage boy was critically wounded in another attack Saturday evening in Gresham on the South Side.

The 26-year-old man and 14-year-old boy were walking westbound on 87th Street about 5:55 p.m. when someone approached them from behind and fired shots in the 8600 block of South Elizabeth Street, police said. The boy was struck multiple times in the chest and taken to Christ Medical Center in Oak Lawn in critical condition. The man was struck in the buttock and was taken to the same hospital in good condition.

Nearly two hours before that, a woman was shot during a struggle over a weapon in Austin on the West Side.

Shortly before 4 p.m., the 22-year-old woman was standing in the 400 block of North Mayfield Avenue when someone in a dark-colored vehicle pulled up to her and they began arguing, police said. Another person attempted to intervene and pulled out a handgun.

A struggle ensued between the driver and the person with the gun, which caused the weapon to fire, striking the woman in the left knee, police said. She was taken to Mt. Sinai Hospital, where she was stabilized.

Another woman was seriously injured Saturday morning in the Back of the Yards on the South Side.

At least 13 other people were wounded in shootings between 5 p.m. Friday and 5 a.m. Monday.

Last weekend, 16 people were shot, four of them fatally, in gun violence across the city.