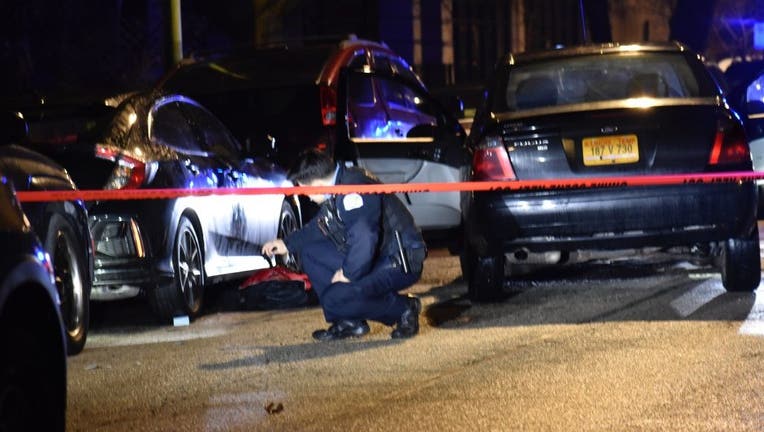 Chicago police investigate after a man was shot and critically wounded while driving Feb. 9, 2020, in the 2800 block of North Campbell Avenue in Avondale. | Carly Behm/Sun-Times

CHICAGO - Twenty-three people were shot in Chicago this weekend, nine of them fatally, according to Chicago police.

Four of the deadly shootings happened within a 12-hour period Saturday, while three others occurred in under an hour early Sunday.

The weekend’s latest fatal shooting left one man dead and another in police custody Sunday morning in South Shore.

A 27-year-old man was in his parked vehicle about 4:35 a.m. in the 7200 block of South Bennett Avenue when he shot a 33-year-old man who was outside, Chicago police said.

The 33-year-old was struck in the abdomen and taken to the University of Chicago Medical Center, where he succumbed to his injuries, police said. The alleged shooter was taken into custody without incident.

Earlier in the morning, man was shot dead and a 7-year-old girl was wounded in Humboldt Park on the West Side.

Fermin Cisneros, 36, was driving a car with the child and several other adults inside at 3:04 a.m. when they heard gunshots from behind them in the 1300 block of North Rockwell Street, officials said. Cisneros was hit in the head and the girl was hit in the back.

The car came to a stop in the 1500 block of North Rockwell and they were both taken to Stroger Hospital, where Cisneros was pronounced dead, authorities said. The girl, who is related to him, is listed in good condition.

Less than an hour before that, two men were shot to death during a robbery in Chinatown on the South Side.

The men, ages 38 and 39, were standing in the parking lot of an apartment complex at 2:13 a.m. with a 44-year-old woman when someone walked up and tried to rob them in the 2000 block of South Wells Street, police said. The woman complied with the robber but the men resisted, at which point the suspect shot them both in the head. They were pronounced dead at the scene. The woman was not injured.

The shooter ran away but was caught and taken into custody a short time later in the 2200 block of South Princeton Avenue, police said. Charges are pending.

Another man was killed Saturday night in West Elsdon on the Southwest Side.

The man, 29, was walking on the sidewalk about 7:20 p.m. when someone in a vehicle pulled up in the 3700 block of West 58th Street and shot him in the head and chest, police said. He was pronounced dead at the scene.

Less than two hours earlier, a 19-year-old man was shot to death in Oakland on the South Side.

Jabari Pittman was walking about 5:30 p.m. in the 3800 block of South Cottage Grove Avenue when someone got out of a green BMW, pulled out a gun and opened fire, police and the Cook County medical examiner’s office said. Pittman, who lived in Oakland, was struck in the head, leg and hand. He was taken to the University of Chicago Medical Center, where he was pronounced dead minutes later.

Saturday morning, a 26-year-old man was fatally shot in Heart of Chicago on the Near West Side.

He was in the 2200 block of West Cullerton Street about 9:15 a.m. when someone opened fire, striking him multiple times, police said. He was taken to Mount Sinai Hospital, where he later died.

A triple shooting 15 minutes earlier left a man dead in Lawndale on the West Side.

The three men were in the 2800 block of West Congress Parkway when they were approached by someone who pulled out two guns and opened fire, police said.

Friday evening, a 39-year-old man was shot dead in a vehicle in East Garfield Park on the West Side.

Travis Thompson was in a parked vehicle about 10:15 p.m. in the 3300 block of West Monroe Street when someone got out of a red or maroon four-door car and opened fire, police and the medical examiner’s office said. Thompson, who lived in Humboldt Park, was shot multiple times and pronounced dead at the scene. The suspected shooter drove off west on Monroe Street.

In non-fatal shootings, a man was critically injured early Sunday outside a bar in Lake View by a male who was fatally shot by police moments later.

About 5:15 a.m., officers in the area responded to calls of a disturbance outside of Tai’s Til 4, 3611 N. Ashland Ave., and as officers arrived, an armed male shot a person outside of the bar and attempted to run from the scene, interim CPD Superintendent Charlie Beck said at a press conference.

Police shot the suspect to death after he allegedly fired shots at officers during the chase, police said. The person who was shot outside the bar was struck in the neck and cheek and hospitalized in critical condition.

Earlier in the morning, woman was wounded in the Heart of Chicago on the South Side.

The 25-year-old was riding in a vehicle with two other people at 3:48 a.m. when someone started shooting from a passing silver four-door sedan in the 2200 block of South Blue Island Avenue, according to police. Someone in a second passing vehicle may also have fired shots. The woman was hit in the leg and taken to Stroger Hospital in fair condition. Investigators think she may not have been the intended target.

On Saturday afternoon, a 20-year-old woman was wounded in Hermosa on the Northwest Side.

She was in the 1900 block of North Keeler Avenue about 2:20 p.m. when an unknown person shot her in the head, police said. She was rushed to Stroger Hospital where she was stabilized.

Eight other people were injured in citywide shootings from 5 p.m. Friday to 5 a.m. Monday.

Last weekend, three people were killed and 19 more were wounded in shootings across the city.