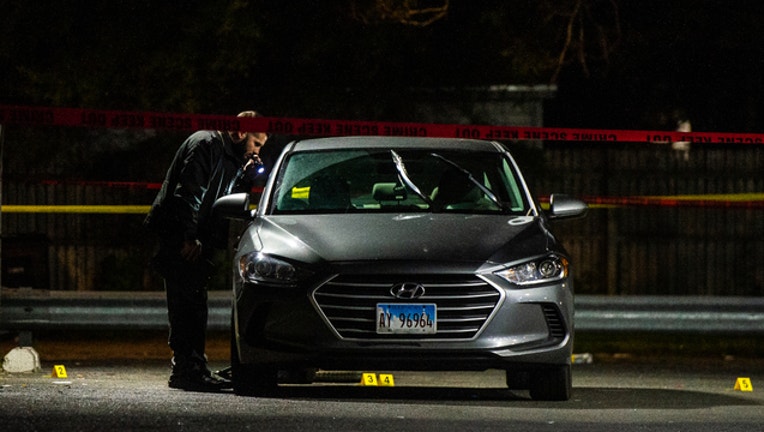 CHICAGO (SUN TIMES MEDIA WIRE) - Nine people were shot Tuesday in Chicago, including a woman who was killed in West Town on the Northwest Side.

Officers responded to calls of a person shot about 8:56 p.m. in the 2200 block of West Grand Avenue and found a woman unresponsive in a living room, Chicago police said. She had a gunshot wound to the neck and was pronounced dead on the scene.

A man was taken into custody as a person of interest, and the incident may be domestic related, police said.

In non-fatal shootings, four women were shot in two separate incidents on the South and West Sides.

The later shooting happened in Garfield Park on the West Side, where two women were wounded in a drive-by.

They were standing with a group of people about 9:30 p.m. in the 4400 block of West Congress Parkway when someone in a silver SUV fired shots at them, police said.

One of the women, 44, was shot in the left leg and was taken to Mount Sinai Hospital, police said. The other woman, 32, was taken to Stroger Hospital with a gunshot wound to the foot. Both of their conditions were stabilized.

The earlier incident, which was also the first shooting of the day, happened at a gas station in South Shore, where two women were shot while standing outside their vehicle.

They were both taken to the University of Chicago Medical Center where their conditions were stabilized, police said. The 26-year-old was struck in the lower backside, while the 27-year-old, who police believe was the intended target, was hit in the leg.

In Tuesday’s latest shooting, a man, 22, was injured after being shot in Princeton Park on the South Side.

He was outside about 10:40 p.m. in the 9400 block of South Harvard Avenue when a man got out of a passing vehicle and fired shots at him, police said.  He was hit in the arm and chest but was able to take himself to Roseland Community Hospital and is in good condition.

In other non-fatal shootings:

On Monday, eight people were shot and one person killed in incidents of gun violence across Chicago.