In 1959, Queen Elizabeth II visited Chicago. It was the British Monarch's only trip to the Windy City.

Queen’s Landing, directly across from Buckingham Fountain, is where Queen Elizabeth arrived more than half a century ago. She was 33 years old at the time.

"Me and my husband, we’ve looked forward to coming to Chicago and the state of Illinois," she said.

It was July 1959 when Queen Elizabeth and Prince Phillip arrived by boat at Chicago’s Monroe Harbor. The Monarchs were eventually greeted by then-Mayor Richard J. Daley. They then were off for a near 14-hour tour of the city.

More than a million spectators were along the lakefront and in downtown Chicago to get a glimpse of royalty. Queen Elizabeth and Prince Phillip were celebrated in a massive parade on Michigan Avenue.

Other stops included the Art Institute, with an entourage of dignitaries, the Ambassador hotel and a formal banquet at the Conrad – now Hilton Hotel. One-thousand guests were invited. It was Her Majesty’s first and only visit to the Windy City. 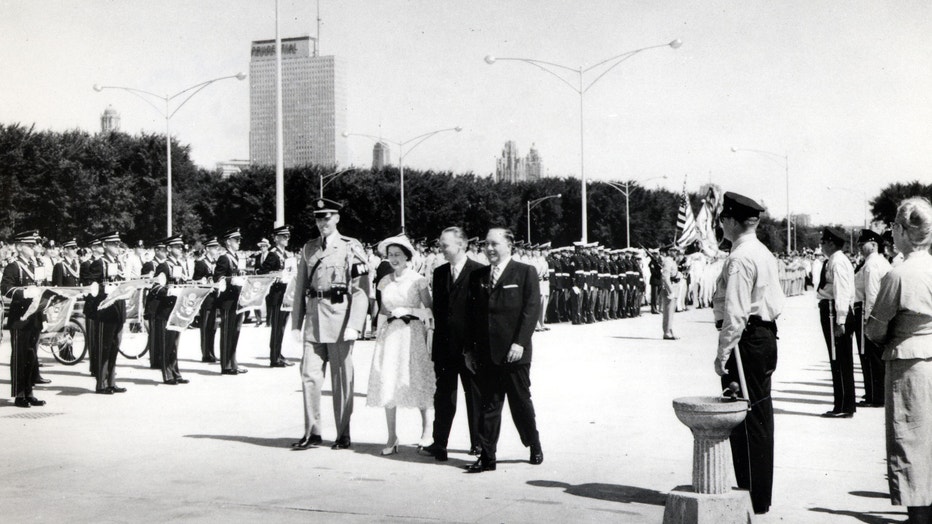 "I think she forged her own path, she was very strong."

"I think most people will agree, regardless of your thoughts on monarchy, she’s a pretty good person."

"Her hats, her perfect coordination, beautiful hats, gonna miss seeing her beautiful style in the news."

"I think it’s best to remember it in her words. She said her life was dedicated to service and being a servant to the people and that’s what she was."

A look back at Queen Elizabeth II's visit to Chicago

The 14-hour stop in 1959 was the first visit of a reigning British Monarch to the city of Chicago.

The 14-hour stop was the first visit of a reigning British Monarch to the Windy City.

On Thursday, Queen Elizabeth II passed peacefully surrounded by family at her Balmoral estate in Scotland. She was 96.

Her death brings to a close a reign that spanned seven decades and made her the most recognized woman in the world.

Queen Elizabeth took to the throne at age 25, and her coronation was the first ever to be televised.

The world, Chicago reacts to death of Queen Elizabeth II

On Thursday, Queen Elizabeth II passed peacefully surrounded by family at her Balmoral estate in Scotland. She was 96.

In a statement, Obama spoke on how Queen Elizabeth welcomed him and Michelle "to the world stage with open arms and extraordinary generosity."

He also spoke on her warmth and considerable humor.

In 2018, while taking a British TV crew through the garden at Buckingham Palace, which should be a peaceful place, the queen joked about Air Force One when she heard helicopters overhead.