Ethan Couch, who used an 'affluenza' defense in a fatal drunk driving crash, was arrested Thursday and booked into the Tarrant County jail for probation violation.

Couch was 16 years old when he killed four people in a 2013 drunk driving crash and was sentenced to 10 years of probation. He did serve two years in jail as an adult for a previous probation violation.

When Couch was released from jail in 2018, one of the conditions of his probation was drug and alcohol testing. 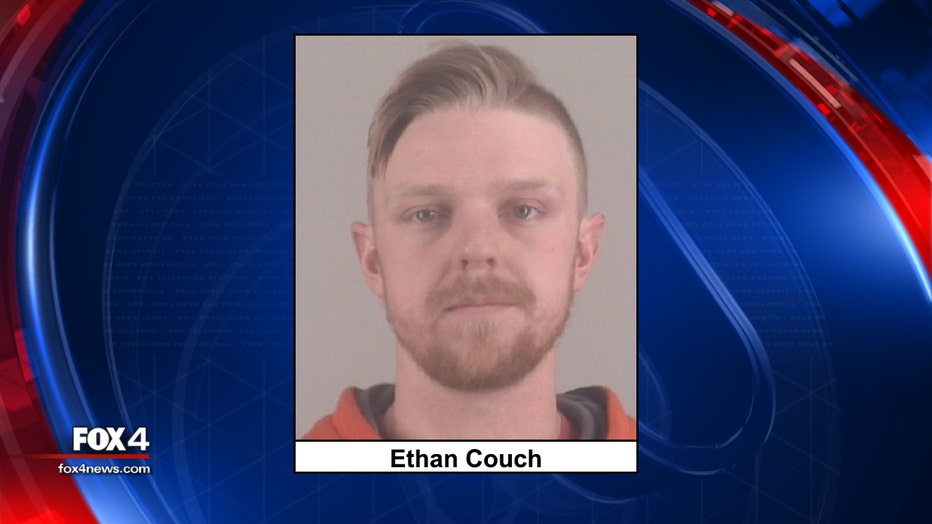 Couch was five years into his 10-year sentence of probation that is set to end in 2024. Now, a judge will likely get the chance to reconsider that sentence and send him to prison.

Richard Alpert was the lead prosecutor in Couch’s trail. He was convicted in juvenile court of intoxication manslaughter for killing four people in 2013. He was 16 years old when he drove drunk and slammed into a group of people around a stranded car near Burleson.

“I’ve believed from the very beginning he was the type of person that was going to continue to re-offend and it was just a matter of time,” Alpert said.

According to his probation violation warrant, Couch tested positive for THC on a drug patch.

“My guess is we have a holiday we just finished, and there was probably some celebrating being done over the holiday,” Alpert said.

Couch had been out on probation most recently since April 2018 after serving a two-year sentence for a previous probation violation. He was originally sentenced to 10 years of probation after his attorney convinced a juvenile court judge that due to his wealthy upbringing, he did not know right from wrong.

But in 2015, video surfaced that appeared to show Couch violating his probation by playing beer pong at a party. He and his mother, Tonya, fled to Mexico. But after nearly a month on the run, they were tracked down by authorities and returned to Tarrant County.

When Couch turned 19 in 2016, his case was moved to the adult court system and a Tarrant County judge gave him the two-year jail sentence: 180 days for each victim.

Alpert says it’s now up to the Tarrant County DA’s office to file a motion with the district clerk’s office to revoke Couch’s probation. But he says it’s up to a judge to decide what happens from there.

“He could leave him on probation. He could modify his probation or he could revoke him,” Alpert said. “And if he revoked him, you can give him anything in the range of punishment that he’s facing.”

And now with a possible probation violation as an adult for the four intoxication manslaughter counts, Alpert says he believes Couch’s lack of remorse and rehabilitation has been a disappointment to the families of his victims. He’s frustrated that Couch has escaped more serious punishment for so long.

“I think he could potentially face as much as 40 years in prison,” Alpert said. “I think it’d be great if publicly it was understood it doesn’t matter how much money you’ve got. It doesn’t matter what expert to call. If you continue to violate the law, you’re gonna be held accountable.”

The probation office is under a gag order and cannot discuss specific details about Couch's record. However, a spokesperson did say it's now up to the DA's office to take action.

Alpert says Tarrant County has 20 days to file a motion while Couch is behind bars.