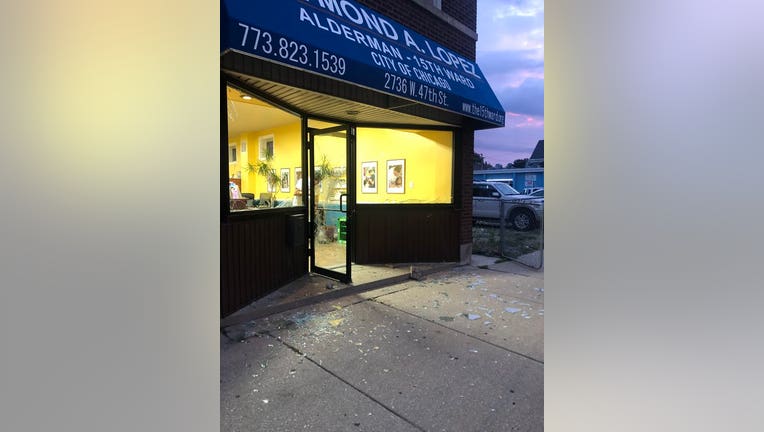 CHICAGO - Ald. Ray Lopez (15th) on Thursday reported the third instance of vandalism targeting his properties in Brighton Park on the Southwest Side.

The latest attack at his ward office, 2736 W. 47th St., comes less than a month after vandals broke a window of his home and torched a neighbor’s garage. His ward office was first vandalized July 19.

Chicago police said someone broke two windows about 5 a.m. Thursday and shattered the glass front door. A brick was found at the scene, but nothing inside appeared to be stolen.

Lopez announced the attack on Twitter, quoting Mayor Lori Lightfoot on the need to protect elected officials from attacks, and then blasted her.

“You failed,” Lopez said. “The third attack in a month! Lawlessness continues in Chicago.”

After the attack on his home, Lopez blamed gang members, saying it stemmed from a confrontation he had with gang members hours earlier in the 4300 block of Fairfield Avenue.

“I’ll be perfectly honest,” Lopez said then, “I’m quite pissed that gang members think that they can walk up to anyone’s house, let alone an alderman’s house, right to the front door and start breaking windows and doing what they want to do, thinking that there’s no repercussions for that.”

Police said they don’t have a suspect description in the latest attack.