Amber Heard has reportedly fired her public relations team over negative coverage of her during her defamation trial against ex-husband Johnny Depp. Depp's witnesses and testimony has caused a stir online and Heard has been unhappy with the negative coverage towards her.

The Johnny Depp vs. Amber Heard defamation trial has now concluded its fourth week, after three weeks centering on the volatile relationship between Depp and Heard.

Depp, 58, is suing Heard, 36, for $50 million in Fairfax County Circuit Court after Heard wrote a December 2018 op-ed piece in The Washington Post describing herself as "a public figure representing domestic abuse." Depp and Heard were married between 2015 and 2017.

While the article never mentions Depp by name, Depp’s lawyers say her article defamed him when she described herself as "a public figure representing domestic abuse" and claim it was a clear reference to abuse allegations Heard levied in 2016, in the midst of the couple’s divorce proceedings.

The "Pirates of the Caribbean" actor claims the abuse allegations were an elaborate "hoax" to promote her film "Aquaman" and punish him for leaving her. Heard countersued Depp for $100 million, accusing him and his former lawyer of conspiring to destroy her reputation in a series of smear campaigns.

And while the trial is still ongoing, here is a breakdown of key moments from the past week’s trial, including Heard and others taking the stand to testify. 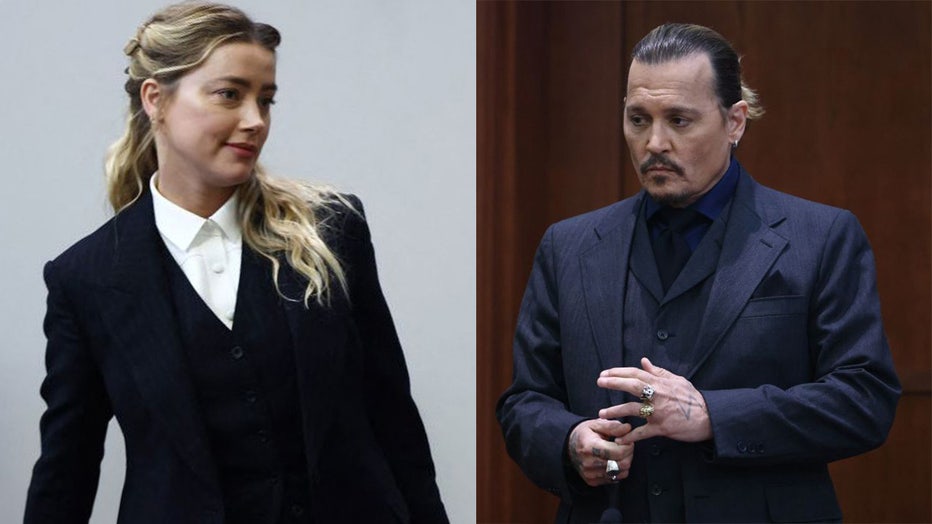 On Monday, Depp’s agent testified that his ex-wife’s 2018 op-ed was "catastrophic" to his career and coincided with the loss of a $23 million deal for a "Pirates of the Caribbean" sequel.

In testimony on Monday, his agent Jack Whigham said the actor was still able to work after the initial allegations made against him in 2016. He acted in movies including "City of Lies," "Murder on the Orient Express," and "Fantastic Beasts The Crimes of Grindelwald" — all of which were shot in 2017.

But it was the 2018’s op-ed piece, Whigham claimed, that was noticeably damaging to Depp’s career.

"It was a first-person account, extremely impactful," Whigham said of the op-ed. 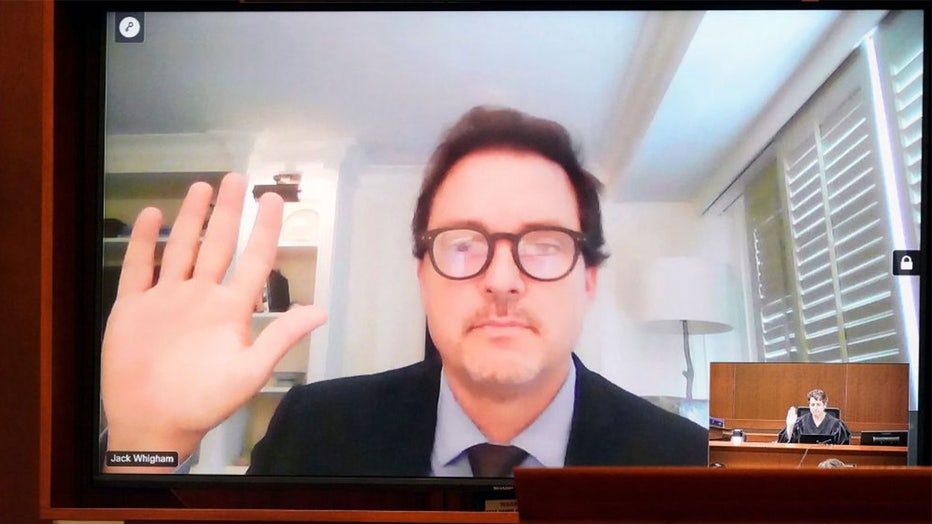 FILE - Jack Whigham, talent manager for US actor Johnny Depp, is seen on a monitor as he testifies remotely in the courtroom at the Fairfax County Circuit Court in Fairfax, Virgnia, on Monday May 2, 2022. (STEVE HELBER/POOL/AFP via Getty Images)

Whigham continued, pointing to Depp’s struggle to get work after the release of the op-ed. He claimed Depp’s pay was cut to work in an independent film "Minimata" and a verbal deal he had for a sixth "Pirates" film was killed.

Heard’s lawyers argued whether the deal with Disney had already fizzled out by the time Heard’s article was published.

In addition, Heard’s’ lawyers, upon cross-examination, cited a variety of factors including reports of heavy drug and alcohol use, along with a lawsuit by a crew member in July 2018 who said he was punched on set by Depp.

Meanwhile, Depp’s lawyers presented testimony from an intellectual property expert who testified about the negative turn in Depp’s reputation. The data showed trend lines from Google searches with negative spikes occurring after the 2016 abuse allegations, but negligible or nonexistent changes after the Washington Post article. 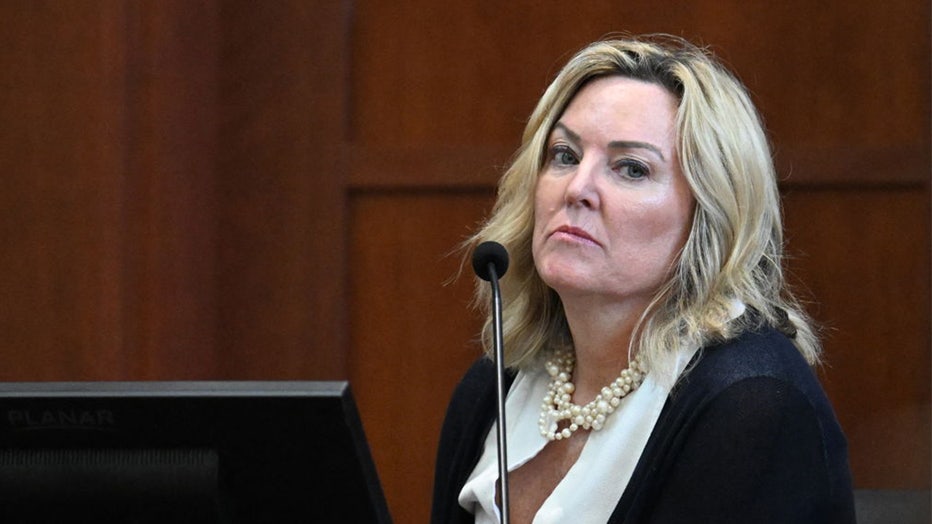 FILE - Forensic psychologist Dr. Dawn Hughes, testifies during a hearing at the Fairfax County Circuit Courthouse in Fairfax, Virginia, on May 3, 2022. (JIM WATSON/POOL/AFP via Getty Images)

After Depp's lawyers rested their case Tuesday morning, a judge rejected a motion from Heard's lawyers to dismiss the case.

Depp’s lead lawyer, Benjamin Chew, claimed that the jury has a wealth of evidence to conclude that Heard falsely accused Depp of abuse. In fact, he said, the evidence shows that "Ms. Heard physically abused him. She's the abuser."

A psychologist took the stand first, testifying on Heard's behalf that Heard suffered post-traumatic stress disorder from the violence she suffered at the hands of her ex-husband, including multiple acts of sexual assault.

The sexual assaults included being forced to perform oral sex and having Depp penetrate her with a liquor bottle, the psychologist, Dawn Hughes, told jurors at the trial.

Meanwhile, Hughes' testimony contradicted that of a psychologist hired by Depp's lawyers, who said Heard was faking her symptoms of post-traumatic stress disorder and suffered from borderline and histrionic personality disorders. Hughes disputed that Heard suffers from any personality disorder.

In her testimony, Hughes also said Heard acknowledged that she did at times push and shove Depp, called him names and insulted his parenting.

However, Hughes argued there's a difference in the violence when a smaller person strikes a larger person, and that Depp's violence was intimidating and threatened her safety.

Much of the violence, Hughes said, stemmed from Depp's jealousy. Hughes claimed he insisted she avoid nude scenes, if she worked at all, and accused her of affairs with other actors.

Wednesday, May 4: Amber Heard takes the witness stand for the 1st time 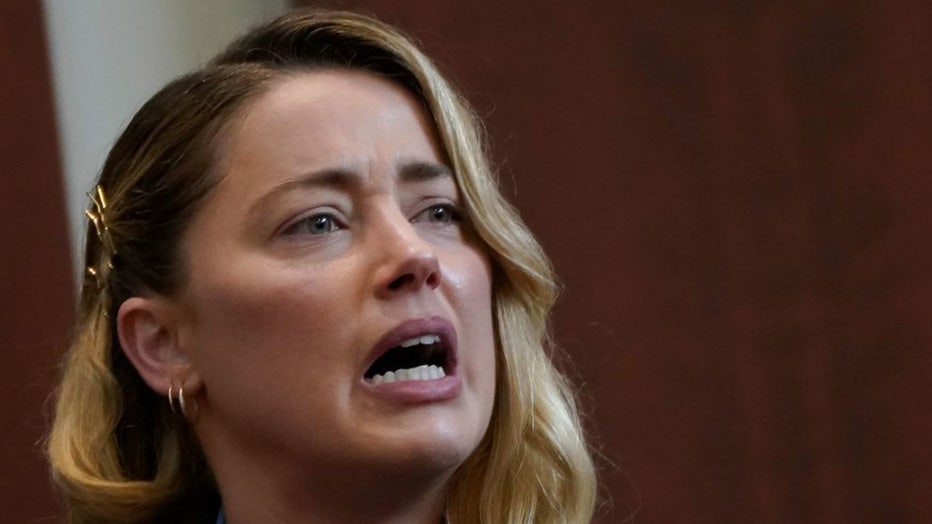 FILE - Actor Amber Heard testifies about the first time her ex-husband, actor Johnny Depp hit her, at Fairfax County Circuit Court during a defamation case against her by Depp in Fairfax, Virginia, on May 4, 2022. (ELIZABETH FRANTZ/POOL/AFP via Getty Images)

Amber Heard took the stand to begin her testimony for the first time amid the nearly month-long trial on May 4.

Heard described to jurors how she and Depp met while filming a movie and fell in love. Despite their 22-year age difference, Heard said there was an instant connection when Depp met with her as he considered her for a role in his film "The Rum Diary."

"I was a no-name actor. I was 22. He was twice my age. He's this world-famous actor and here we are getting along about obscure books, old blues," said Heard.

She said that the first act of physical violence came in 2013 as she was looking at one of his tattoos and couldn't read it. She laughed when Depp told her it said "Wino" — an alteration to a tattoo he had made when he'd been dating actor Winona Ryder.

Heard said she laughed again after he slapped her, thinking it must be a joke. He then slapped her two more times, the third time knocking her off balance, Heard said.

Depp, who has already taken the stand and testified for four days, told jurors a different version of the story.

"It didn’t happen," he said of the alleged assault. "Why would I take such great offense to someone making fun of a tattoo on my body? That allegation never made any sense to me."

Heard said she knew she should leave Depp the first time he hit her, but she couldn't bring herself to do it.

"I knew I couldn't just forgive him, right, because that means it will happen again. Like, I've seen the health class videos," Heard told jurors through tears as she took the stand in Depp's libel lawsuit against her. "I was heartbroken."

Heard said she walked away after being slapped, but a few days later Depp came back with an apology, a few cases of her favorite wine and a promise he'd never do it again.

"I wanted to believe him, so I chose to," she said.

During cross-examination on Wednesday, Hughes acknowledged that she wasn’t making factual determinations that Depp assaulted Heard on specific occasions. But she testified that Heard’s account of her experiences are consistent with accounts of those experiencing domestic violence.

Hughes said Heard initially was framing the encounters as consensual but "angry sex."

"She wasn’t framing them as physical force," Hughes said. 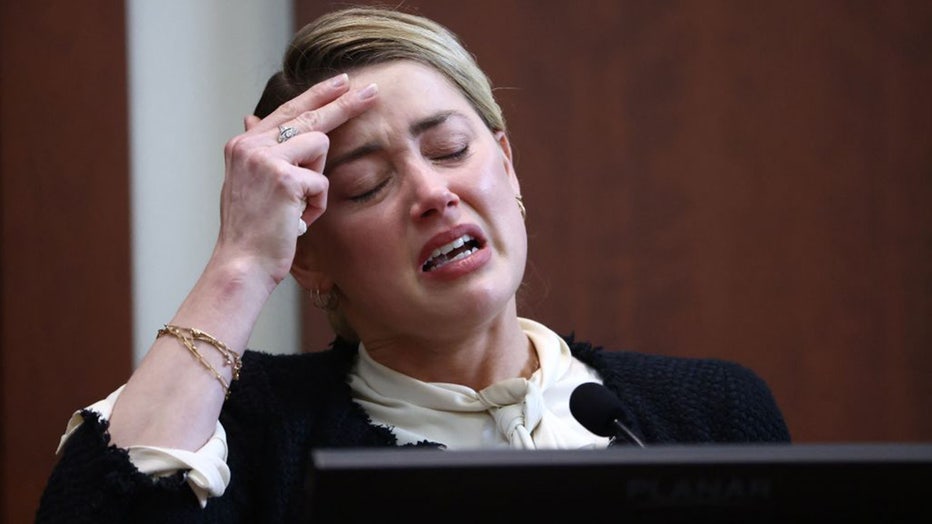 FILE - US actress Amber Heard testifies at the Fairfax County Circuit Courthouse in Fairfax, Virginia, on May 5, 2022. (JIM LO SCALZO/POOL/AFP via Getty Images)

Heard’s testimony continued on May 5 as she tearfully told jurors Depp sexually assaulted her with a liquor bottle in an alcohol-fueled rage.

The March 2015 incident in Australia, where Depp was filming the fifth "Pirates of the Caribbean" movie, is sharply disputed and has been a focal point of the four-week civil trial.

The night of the incident ended with the tip of Depp's middle finger being cut off after Heard allegedly threw a vodka bottle at him. Heard also alleged that after the finger injury, Depp wrote vulgar messages in blood on the walls of the house, all of which Depp has denied ever doing.

During the incident, Heard alleged Depp accused her of sleeping with co-stars in her movies, including Billy Bob Thornton and Eddie Redmayne, with whom she'd just shot the film "The Danish Girl" — accusations she denied.

The fight escalated to the point where he threw her into a ping-pong table, breaking it, Heard testified. He ripped off her nightgown, and Heard said she was naked and exposed as she was assaulted.

"I couldn't get up. I thought he was punching me," she said. "I could just feel this pressure on my pubic bone."

She thought he was assaulting her with her fist, but later figured out that she was being assaulted with a bottle, and realized that there had been numerous bottles broken in the fight.

"I looked around and saw so much broken glass. I just remember thinking, ‘Please God, please don’t be broken,'" she said.

"'I’ll f—king kill you.' He said it to me over and over again," Heard told jurors.

Heard described bizarre details in the aftermath of the attack, including seeing her shredded burgundy nightgown used to wrap a raw steak that had been left out. She said that when Depp's security team finally arrived to tend to his severed finger, Depp was still trying to leave vulgar messages for her, but was trying to write them by urinating on the wall.

Additionally, she described an incident that has already come up at trial, a May 2014 plane ride from Boston to Los Angeles. According to Heard, Depp was jealous and irate that she was making a movie with actor James Franco that included a kissing scene.

As soon as Depp stepped into the private plane, he began berating her, she said. She got up and walked away, but Depp followed her. At one point, he slapped her, Heard testified. Later, she said, he kicked her, and not one person on board intervened on her behalf.

"I felt this boot in my back," she said. "I fell to the floor. And no one said anything. No one did anything. You could have heard a pin drop. I just remember feeling so embarrassed."

Heard has testified that she was physically and sexually assaulted on multiple occasions by Depp, typically when he was drunk or high on drugs. Depp has denied ever hitting her, but Heard's lawyers have said his denials lack credibility in part because he can't remember what he's done when he blacks out.

A spokesperson for Depp said Heard "did indeed deliver ‘the performance of her life’ in her direct examination" in a Thursday statement.

"While Ms. Heard’s stories have continued to grow new and convenient details, Mr. Depp's recollections have remained exactly the same throughout the six painful years since her first allegations were made," the spokesperson said. "His truth — the truth — is the same no matter the environment in which it is has been presented. The upcoming cross examination from Mr. Depp’s team will be most telling, and will certainly highlight the many fallacies Ms. Heard has now attempted to pass off as fact throughout her convoluted testimony."

Johnny Depp testified that he wrote on the wall in his own blood after Amber Heard threw a vodka bottle at him, slicing off the tip of the middle finger on his right hand.

When will the Johnny Depp vs. Amber Heard defamation trial resume?

The defamation trial will go dark for one week. Heard is due back on the stand to continue her direct testimony on May 16.

The one-week hiatus was prescheduled.

The Associated Press, FOX News and FOX 5 DC contributed to this report.