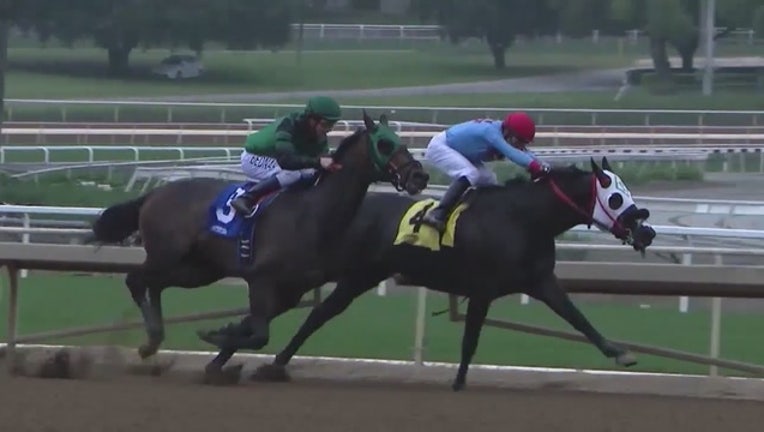 ARCADIA, Calif. (FOX 11) - Another horse died Saturday at Santa Anita Park, the 30th fatality at the famed racetrack since Dec. 26, and the second horse to die there since Santa Anita officials refused a request from the state regulatory board to suspend racing temporarily.

Mike Marten, a spokesman for the California Horse Racing Board, confirmed that American Currency -- a 4-year-old gelding -- suffered a fatal leg injury Saturday morning while exercising on the main track at Santa Anita and was euthanized.

Santa Anita's racing season is scheduled to end on Sunday.

American Currency was owned and trained by Jerry Hollendorfer, who came in for heavy criticism in a CNN story Friday, which reported that the CHRB is investigating the role of trainers in some of the deaths and has experts examining the remains of the dead horses for clues. The board was said to be working with L.A. County prosecutors to determine "whether unlawful conduct or conditions affected the welfare and safety of horses."

The CHRB refused to comment for that story, which reported that Hollendorfer has lost three horses at Santa Anita since December (before American Currency's death) and another two at Golden Gate Fields near San Francisco, another track owned by The Stronach Group, Santa Anita's owner.

Both of the horses Hollendorfer had scheduled to run at Santa Anita on Sunday -- Golden Star Lady (race 4) and Sneaking Out (race 6) -- have been scratched.

On June 9, responding to the 28th death of the season, the CHRB recommended the facility suspend racing for its final two weekends. Track officials declined, however, and hours later Truffalino, a 3-year-old filly, collapsed and died of an apparent heart attack during a race conducted in temperatures that reached the upper 90s.

Under current law, the CHRB does not have the authority to suspend a race meet or remove race dates from a current race meet without the approval of the race track operator or without holding a public meeting with ten days public notice.

"The Chairman, Vice Chairman and the Executive Director recommended to Santa Anita management that they suspend racing for the seven remaining race days but that they allow horses to continue to train during that period. This would provide the industry more time to fully implement announced safety
initiatives and perhaps additional ones.

"It is our understanding that Santa Anita management, after consultation with certain other industry stakeholders, believes that for a variety of reasons, the future of California racing is best served by continuing to race."

The board still had time to halt Santa Anita's final weekend of racing with the required 10 days notice, but opted against it.

The number of deaths at the track have prompted calls from animal-advocacy groups and some politicians for a halt in racing at Santa Anita, or even to ban the sport in California altogether.

In April, Los Angeles County District Attorney Jackie Lacey announced the creation of a task force to investigate the deaths of the horses at the track.

California Sen. Dianne Feinstein and Rep. Judy Chu, D-Pasadena, have both called for racing to be suspended at the track until the deaths can be fully investigated.

Racing was halted at the track for most of March while examinations were conducted on the track. Races resumed April 4 after the state horse racing board approved a series of safety measures, and Santa Anita officials announced a series of new measures to help bolster the safety of horses at the track, including restrictions on certain medications, requiring trainers to get permission in advance before putting a horse through a workout and investing in diagnostic equipment to aid in the early detection of pre-existing conditions.

Santa Anita and the CHRB also created a "safety review team" that evaluates all horses at the track. The five-member panel of veterinarians and stewards has the authority to scratch a horse from a race if even one panelist questions the animal's fitness.

However, since American Currency was not entered in any races this weekend, he was not reviewed by the panel, according to Marten.