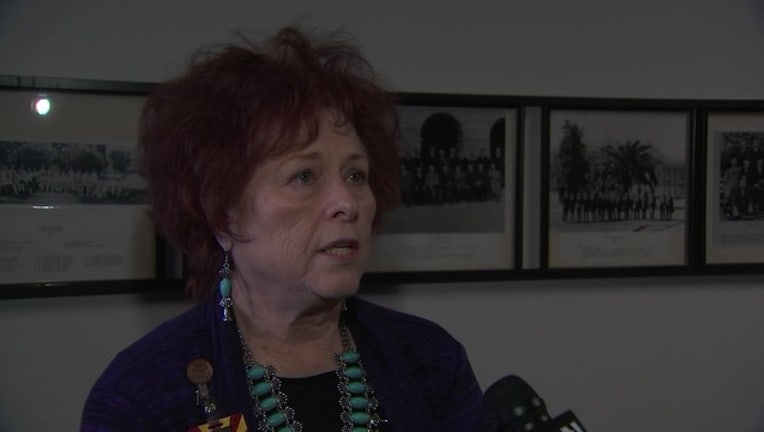 PHOENIX (AP) -- A veteran Arizona legislator is apologizing while defending herself from criticism for comments she made on immigration and birth rates.

The Phoenix New Times posted audio of a July 15 speech during which state Sen. Sylvia Allen said a flood of immigration and low birth rates among whites amid a lack cultural assimilation mean "we're going to look like South American countries very quickly."

The Republican from Snowflake, Arizona, who is white, also said the U.S. has to regulate immigration so the country can provide jobs, education, health care and other needs.

Wendy Rogers, a Republican running for the state Senate seat now held by Allen, issued a statement Saturday denouncing Allen's comments as "very racist" and said Allen should retire from the Legislature.

Democratic state Sen. Martin Quezada told the Arizona Republic that the "tone and perspective" of Allen's remarks on migrants were "insulting, to say the least."

The Arizona Democratic Legislative Campaign Committee in a statement compared the comments to those of former Arizona Rep. David Stringer. In June 2018, the Prescott Republican said there "there aren't enough white kids to go around" in the United States and called immigration "an existential threat."

Allen in Facebook posts Friday and Saturday apologized "to anyone who has been hurt by her words." But she said her comments on immigration and birth rates were largely based on research by a respected demographer.

"Sadly, immigration has become a most contentious issue in our country," she said in one of the posts, mentioning that she supports legal immigration and that her extended family sponsored a Laotian family "and helped them to assimilate into our country."

Later, in a comment on her Facebook post Saturday, she thanked people who spoke in support and added, "Verbal Lynching is the political tool used today to silence debate on critical issues."