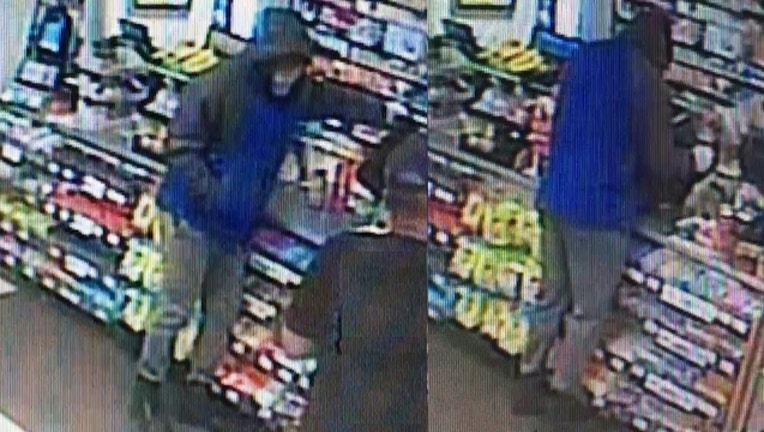 Surveillance images of the suspect in an armed robbery Wednesday at a 7-Eleven store in Plainfield. | Plainfield police

SUN TIMES MEDIA WIRE - A person implying that he had a gun robbed a 7-Eleven store Wednesday evening in southwest suburban Plainfield.

About 6 p.m., the male suspect entered the store at 14807 S. Route 59 in Plainfield, walked up to the counter, implied he had a weapon and told an employee to give him the money from the register, according to a statement from Plainfield police. The employee then put the money into a black cloth bag that the robber had brought with him.

The suspect ran away southbound toward Main Street, police said. Officers and a police dog searched the area but were not able to find him.

The suspect was described as a male standing between 5-foot-10 and 6-foot-1 and weighing about 180 pounds, police said. He was wearing a dark blue jacket with a hood, white gloved, gray sweatpants, black boots and a dark-colored face mask.

There were customers inside the store at the time of the robbery, but no one was injured, police said.