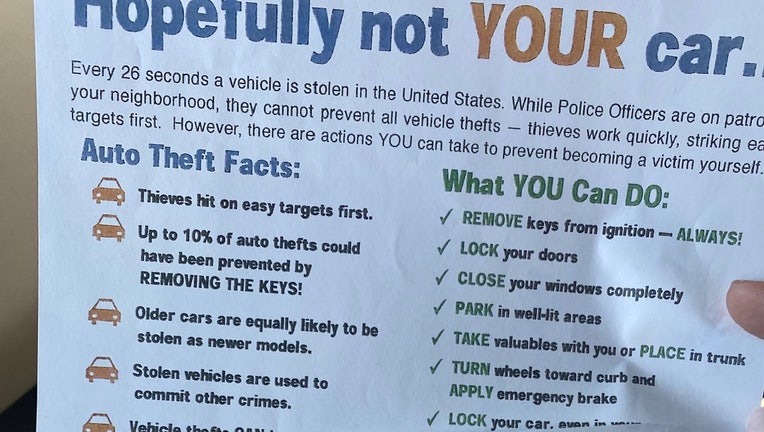 CHICAGO - Chicago Police are handing out flyers to drivers that list ways people can avoid getting carjacked.

Carjackings are a huge problem in Chicago. Police data shows there were 870 carjackings from Jan. 1 through July 22, 2021, which was up 53 percent from the same period in 2020.

The flyers that were being handed out on Taylor Street in the Near West Side on Tuesday offered information about strategies that carjackers use, like the "Bump and Run," in which another car rear-ends your car. Then, the passenger in that car jumps into your driver's seat while you're out looking at the damage and takes off.

CPD also warns against helping "Stranded Motorists" who could just be waiting to steal your ride and leave you on the side the of road.

The Chicago Police Department carjacking flyer recommends that you:

In what appears to be a botched carjacking, the men begin shooting into Yvonne Ruzich’s car as she speeds away. The gunmen chased her down and shot her five more times before fleeing the scene.