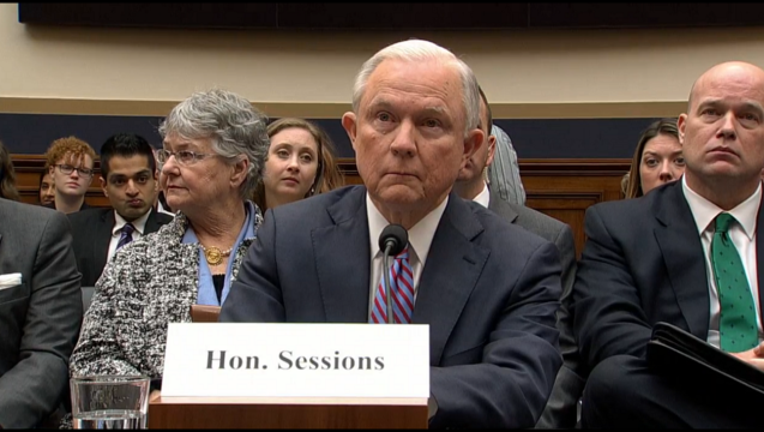 The interview came as Mueller investigates whether President Donald Trump's actions in office, including the firing of FBI Director James Comey, constitute efforts to obstruct the FBI probe into contacts between his 2016 campaign and Russia. Trump's own lawyers are discussing the prospect of an interview with the president himself, and White House officials state publicly that they anticipate a resolution soon to the investigation.

The questioning of the country's chief law enforcement officer is a reflection of investigators' continued interest in whether the president took steps to improperly obstruct justice. That question has been at the heart of the investigation for months as agents and prosecutors have questioned multiple current and former White House officials.

Sessions himself is seen as a potentially important witness given his direct involvement in the May 9 firing of Comey. The White House initially said the termination was done on the recommendation of the Justice Department and cited a memo from Deputy Attorney General Rod Rosenstein that faulted Comey for his handling of the Hillary Clinton email server investigation as justification.

But Trump said later that he was thinking of "this Russia thing" when he fired Comey, and he had decided to make the move even before the Justice Department's recommendations.

Sessions was one of Trump's earliest and most loyal allies, the first senator to endorse him during the presidential campaign and a key national security adviser during the election effort.

He was present at a March 2016 meeting attended by George Papadopoulos, a campaign foreign policy adviser who pleaded guilty last year to lying to the FBI about his own foreign contacts. Sessions may have been asked during his Mueller interview about any interactions he had with Papadopoulos, as well as about his own encounters during the campaign with the Russian ambassador to the United States.

Over the past several months Mueller investigators have spoken with other key people close to the president, including White House Counsel Don McGahn, former chief of staff Reince Priebus and Trump's son-in-law, Jared Kushner, as they examine the campaign's contacts with Russia and potential obstruction.

Mueller has conveyed interest in speaking with the president, and White House attorney Ty Cobb said that is "under active discussion" with Trump's individual lawyers. He said last week on a CBS News' political podcast, "The Takeout," that he expected the investigation to be wrapped up within weeks.

"There's no reason for it not to conclude soon," Cobb said. "Soon to me would be in the next four to six weeks."

In the Oval Office on Tuesday, Trump said he was "not at all concerned" about what Sessions may have told the Mueller's investigators.

Sessions recused himself from the Russia investigation in early March after acknowledging that he had had two previously undisclosed encounters with the Russian ambassador during Trump's 2016 presidential campaign. He said at the time that it would be improper for him to oversee a probe into a campaign for which he was a vocal and prominent supporter.

Though Trump and Sessions during the campaign shared an ambitious law-and-order agenda, and even though the attorney general has continued to push the president's priorities, the recusal decision had strained their bond. Since then, Trump has lashed out repeatedly on Twitter at Sessions and the Justice Department, and the two men now rarely speak directly. Trump saw the recusal as weak and disloyal, believing his attorney general should be doing more to protect him

People familiar with the matter have told The Associated Press that McGahn had contacted Sessions to urge him to retain control of the investigation. McGahn was acting at the behest of the president, according to one of those people, who spoke only on condition of anonymity because the person was not authorized to speak publicly by name.

Rosenstein appointed Mueller, a former FBI director, to take over the Russia investigation one week after Comey was fired. He oversees the work of Mueller's investigators, but he told the AP in an interview last June that he, too, would recuse himself if his actions ever became relevant to the probe.

Sessions' attorney, Chuck Cooper, declined to comment, as did the White House.

Four people have so far been charged in the Mueller investigation, including former White House National Security Adviser Michael Flynn and former Trump campaign chairman Paul Manafort. Flynn and Papadopoulos have pleaded guilty to lying to the FBI.