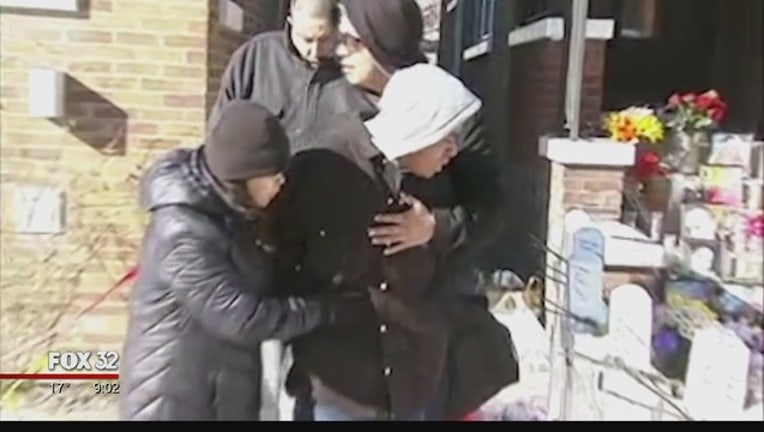 Maria Herminia Martinez was in a kneeling position in an upstairs bedroom, her head slumped on an end table — with four bullet wounds to her head and gunshots to each of her hands — when Chicago Police found her and five family members slain in February in their Gage Park house.

Two small-caliber bullets and a fragment were recovered from Martinez’s body, according to reports released to the Chicago Sun-Times on Tuesday by the Cook County Medical Examiner’s office.

The bodies of four adults and two children, ages 10 and 13, were found throughout the bungalow on Feb. 4 in the 5700 block of South California after a friend of Noe Martinez Jr., one of the victims, tipped police that the O’Hare Airport window cleaner hadn’t showed up for his job for two days.

No one is charged with the mass killing. Police say they don’t think any of the victims was involved in crime. The doors to the house were locked, and the contents were undisturbed. Sources have said detectives were investigating the possibility that the killings involved a domestic situation.

The newly released reports show Herminia Martinez’s 13-year-old son, Leonardo Cruz, suffered a dozen knife wounds to the head, cheek, neck and shoulder. Leonardo, who wore braces on his teeth, was found prone near a fireplace in the living room. A textbook, ruler and pencil lay nearby.

Noe Martinez Sr., 62, suffered 42 knife wounds all over his body, including his left hand, neck, chest, groin and left leg, the reports show. His body was in a front hallway. A pocketknife was near his body, but the reports don’t say whether it was used in his killing. He was wearing an unzipped black winter jacket.

A cooler filled with tamales sat near the front door. The owner of Manolo’s Tamales told WFLD-FOX 32 that police took video from his restaurant showing the family buying food the night of Feb. 2, two days before the slaying was discovered. Noe Martinez Jr. was supposed to bring tamales to an office party at O’Hare but didn’t show up, prompting a co-worker to notify police.

Previously released medical examiner’s reports showed Leonardo’s brother, Alexis, 10, Noe Martinez Jr., 38, and his mother, Rosaura, 58, were repeatedly stabbed. Alexis was found on a rug in the basement near a book bag holding a binder of drawings. Noe Jr. was found 5 feet from Herminia, his sister, with his head resting on a forearm. Their mother, Rosaura, was in an enclosed porch. All of the family members were clothed.