Former President Obama speaks at U of C

Former President Barack Obama was back in Chicago Wednesday, giving a speech at U of C.

CHICAGO - Returning to his hometown, former President Barack Obama on Wednesday warned of the weaponization of disinformation across the world, while also urging social media and tech companies to be more transparent about how they are monitoring content that is leading to violence.

Obama spoke at length about his concerns over a trifecta of the loss of local journalism, the nationalization of "anger-based" journalism, and the growth of social media companies making profits off conflict.

He said he believes platforms such as Twitter, Facebook and YouTube "appear to have some insight into what’s more likely to prompt insurrectionists, white supremacists, misogynist behavior and internet bullying."

"They seem to know what it is. … We don’t want to be policing everything that’s said on the internet, but what they haven’t been forthcoming on is what their product designs are," Obama said. "And there are ways in which a democracy can rightly expect them to show us … to show us in the same way than any other product."

The South Side Democrat who launched his political career from nearby Kenwood spoke on Day One of a three-day "Disinformation and the Erosion of Democracy" conference at the University of Chicago’s Institute of Politics, in partnership with The Atlantic.

The former president said there was a post-World War II consensus of standards within journalism and regulatory guidelines for industries to follow, "and it was possible for them to have a debate between the left and the right in which we differ strongly on substance, but we agreed on process."

"What we’ve seen is a breakdown of that consensus and what we’ve seen is a shift in technology and who controls these platforms in ways that are not transparent and that has contributed to anger, a sense in which we are no longer operating by the same rules or on the same facts," Obama said. 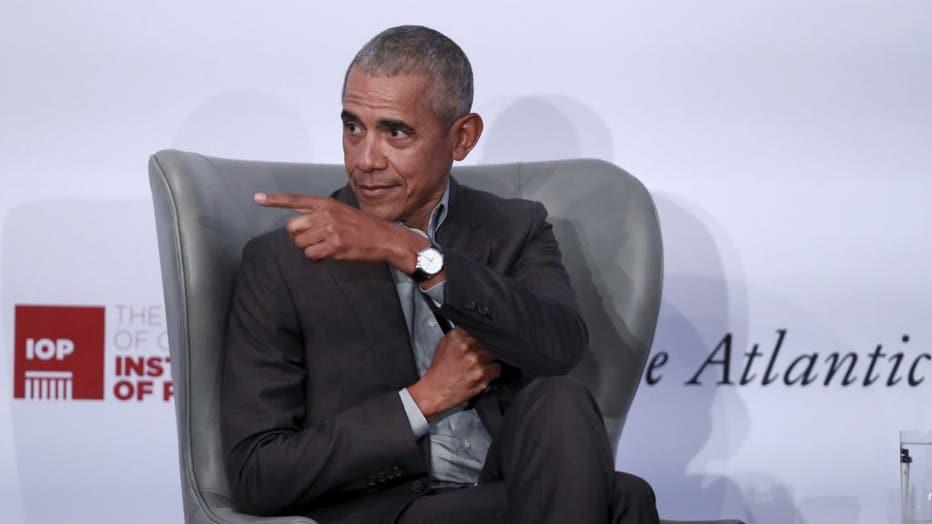 Former President Barack Obama has a conversation with The Atlantic's editor-in-chief, Jeffrey Goldberg, during the Disinformation and the Erosion of Democracy conference at the University of Chicago on Wednesday, April 6, 2022. (Chris Sweda/Chicago T

The visit to Chicago came a day after the 44th president’s first visit to the White House in five years, which Democrats hoped would provide a jolt to President Joe Biden’s sagging poll numbers ahead of this year’s midterm elections.

Wednesday’s event began with a discussion of Russian President Vladimir Putin’s invasion of Ukraine, which Obama called a "tragedy of historic proportions" and a warning to democracies across the world.

"I don’t know that the person I knew is the same as the person who is now leading this charge," Obama said of Putin. "He was always ruthless. We witnessed what he did in Chechnya. He had no qualms about crushing those who were considered a threat. That’s not new. For him to bet the farm in this way, I would not have necessarily predicted from him five years ago."

Prior to the event, Obama spoke with 12 University of Chicago Obama Foundation scholars about challenges to democracy and the impacts of disinformation, according to the Obama Foundation, whose head Valerie Jarrett later attended the former president’s event.

Obama on Tuesday returned to the White House for an East Room signing of an executive order that closed a loophole that prevented at least 5 million Americans from receiving subsidized health care under the Affordable Care Act.

The nation’s first African American president has kept a relatively low profile since leaving office in 2017. He has taken vocal positions on some key issues, however, such as urging the Senate in an op-ed to pass voting rights legislation and voicing support for Biden’s Build Back Better plan.

But he appears to be slowly reemerging in public life as Democrats need his help during a crucial midterm election year. Obama is planning to appear in a sit-down interview with NBC "Today" show meteorologist Al Roker on April 13 to talk about the environment and his new Netflix documentary, "Our Great National Parks."

The former president has also taken a noted interest in disinformation during the Trump administration and in the post-President Donald Trump years. He is scheduled to give a keynote address on disinformation on April 21 at Stanford University.