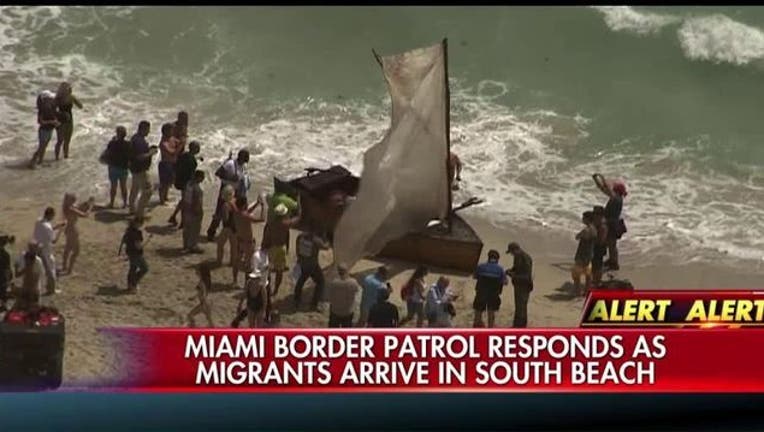 Border Patrol is responding to South Beach in Florida after a dozen migrants and a dog arrived on land by raft.

A South Beach Ritz-Carlton customer spotted 11 males, a female and a dog on a raft around 11 a.m. today.

Their nationality is not yet known.

Ritz-Carlton staff brought food and water to the migrants, while beachgoers offered clothes and cash to the group, WSVN.com reported.

"Miami Beach Police spokesperson Ernesto Rodriguez said it is unknown how long the group were at sea. Rodriguez said he could not confirm the migrants' nationality but said the migrants appeared to be Hispanic. Under the 1966 Cuban Adjustment Act, or "wet-foot-dry-foot" policy, if the migrants are in fact Cuban, they would be allowed to remain in the United States legally. "Our Ocean Rescue spotted 11 males, one female and one dog, I'm being told, near 17th Street and the beach. Right now, what we're doing is we're waiting for Border Patrol to arrive and take over the scene," said Rodriguez. "We have Miami Beach Fire Rescue to tend to any immediate medical needs they may have, and our officers are there standing by as well for Border Patrol."