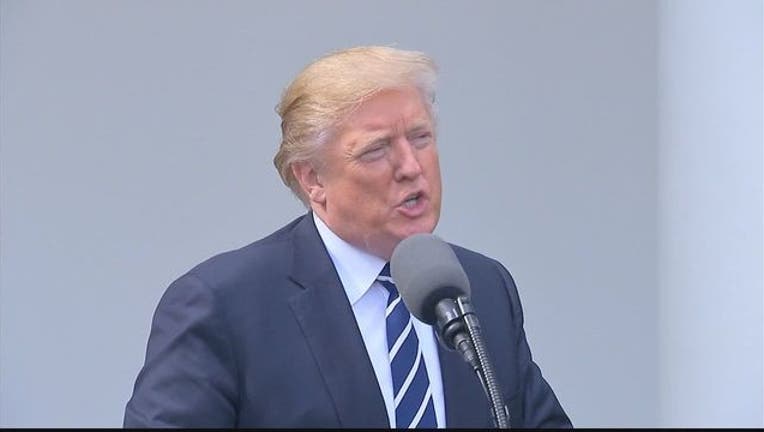 US Rep: Trump says fallen soldier knew what he signed up for

WASHINGTON (AP) - Former presidents are shedding a traditional reluctance to criticize their successors, unleashing pointed attacks on the Trump White House and the commander in chief - but without mentioning him by name.

Remarks on the same day by former Presidents George W. Bush and Barack Obama raise the prospect that more dissenters will follow in defiance of President Donald Trump and his policies.

"What they are doing is laying down a marker for acceptable public discourse," said Kathleen Hall Jamieson, a professor of political communication and rhetorical theory at the University of Pennsylvania. "They're saying, 'We don't stand for that kind of language and behavior. These are our values, these are our principles.'"

Bush and Obama themselves were preceded by other prominent figures. In recent weeks, Republican Sens. Bob Corker of Tennessee and Arizonans John McCain and Jeff Flake have taken swipes at a president who has pushed the limits of polite political discourse and has seemed to relish public fights over sensitive subjects, including nuclear war, race relations, immigrants and, this week, the war dead.

Bush this week delivered a speech that was remarkable for its takedowns of key features of the political movement that put Trump in power.

"Bullying and prejudice in our public life sets a national tone, provides permission for cruelty and bigotry, and compromises the moral education of children," he said in New York.

Never a fan of Trump's, Bush drew his biggest applause with this line: "The only way to pass along civic values is to first live up to them."

Three hundred miles to the south, Obama, a Democrat, used a similar approach to denounce Trump's brand of politics.

"Why are we deliberately trying to misunderstand each other and be cruel to each other and put each other down? That's not who we are," he said during a political appearance in Richmond, Virginia.

At the White House on Friday, presidential spokeswoman Sarah Huckabee Sanders said the administration believes the former presidents' remarks "were not directed towards the president."

Trump said Friday he does not believe that feuding with Republican senators could get in the way of his agenda for tax cuts and a new health care law.

"I think, actually sometimes it helps," Trump said in an interview on Fox Business Network. "Sometimes it gets people to do what they're supposed to be doing."

However coincidental, Bush and Obama's comments capped periods of reticence for both men during Trump's tumultuous first months in office. Neither mentioned Trump's name, but the pair left no doubt who they were talking about. Trump has pursued a ban on Muslim immigration, feuded with disabled Americans, hurricane victims and Gold Star parents and bestowed belittling nicknames on critics - including former Florida Gov. Jeb Bush, Bush's brother, during the 2016 GOP primary.

To be sure, there remains a long slate of Cabinet members and lawmakers who try not to cross Trump in public - from Secretary of State Rex Tillerson, to most of the Senate Republican caucus.

In the age of social media and under a president with a delicate Twitter trigger, the retaliation can be brutal.

"In 1982, I could have said anything and my constituents may or may not have known about it," said Dan Glickman, a former member of the House from Kansas. "But now, the comments and the reaction beams around the world instantaneously."

Most of Trump's loudest critics within his own party aren't running for public office again and don't need his support.

McCain and Trump have been on prickly territory since Trump said in 2015 that McCain is "not a war hero." It was only exacerbated when McCain's Senate votes helped kill Republican efforts to repeal and replace Obama's signature health care law.

McCain has denounced Trump and his supporters multiple times, including this week when he accused them of trading international leadership for "some half-baked, spurious nationalism cooked up by people who would rather find scapegoats than solve problems."

Trump warned McCain in a radio interview: "I fight back." The Arizona senator, tortured for more than five years in Vietnam and now fighting brain cancer, replied: "I have faced tougher adversaries."

Corker has long questioned Trump's competence as president and said the people around the president are what's saving the country from Trump-fueled "chaos." Last week, after announcing his retirement from the Senate, Corker described the White House as an "adult day care center." Trump on Twitter nicknamed him "Liddle' Bob Corker."

Flake, the only one of the three seeking re-election, has a GOP primary opponent backed by some Trump supporters, including former adviser Steve Bannon.

The senator has been confronting Trump since 2016, when he stood up in a private caucus meeting and introduced himself to Trump as the senator from Arizona "who didn't get captured."

Then there's Tillerson, who was quoted as calling the president "a moron" in private after a July meeting. After the comment was reported, Tillerson tried to patch things up in an extraordinary press conference in which he described Trump as "smart." A meeting with Trump and interviews followed, with Tillerson insisting his fraught relationship with the president is actually strong.

But though a Tillerson aide denied Tillerson had called Trump a moron, the secretary of state himself never has.