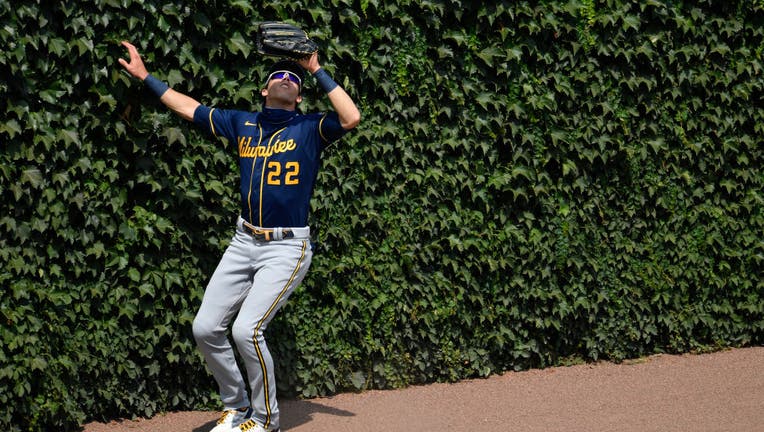 CHICAGO, ILLINOIS - AUGUST 15: Christian Yelich #22 of the Milwaukee Brewers watches the home run ball hit by Anthony Rizzo of the Chicago Cubs in the first inning at Wrigley Field on August 15, 2020 in Chicago, Illinois. (Photo by Quinn Harris/Getty

The Cubs were the only team in the majors that hadn’t dropped back-to-back games before two straight losses to Milwaukee at Wrigley Field. Chicago had won three of four and 12 of 15.

Garcia doubled to deep right off Jeremy Jeffress (1-1) to score automatic runner Christian Yelich from second base to start the 10th. Luis Urías reached on an infield single for an additional run.

Alex Claudio retired three straight batters in the Cubs 10th for his first save. Ian Happ drove in a run with a groundout.

David Phelps (2-1) threw a scoreless inning for the victory.

Urías had three hits and Ryan Braun and Garcia added two hits apiece for the Brewers, who beat Chicago 4-3 on Friday night.

Steven Souza Jr. hit his first homer since Sept. 30, 2018, to make it 4-all in the eighth for the Cubs. He sent Corey Knebel’s two-out first pitch to the left-field corner basket.

Braun doubled, advanced on Casey Sadler’s wild pitch and scored the go-ahead run on second baseman Jason Kipnis’ fielding error in the sixth. Braun doubled twice after he was 0 for 8 entering the game since he returned from the IL on Tuesday from an infected right index finger.

Right-hander Adrian Houser retired his final eight batters after allowing three runs in the first two innings. He struck out five and gave up five hits.

Rizzo hit a first-pitch solo shot to the left-field basket off Houser in the first. After back-to-back walks, Happ doubled to extend the Cubs’ lead to 2-0.

Rizzo doubled to center for a 3-0 Cubs lead in the second.

Right-hander Colin Rea allowed three runs and four hits in 3 1/3 innings in his first start for the Cubs since 2016. He filled in for Alec Mills, who started Friday in place of Tyler Chatwood (mid-back tightness).

Justin Smoak hit a two-run double to chase Rea in the fourth. Braun drew a walk off Ryan Tepera before Urías singled to make it 3-all.

Saturday’s start was shifted to 2:20 p.m. from 7:15 p.m. because of forecasted inclement weather.

Cubs: Chatwood (mid-back tightness) will start during Monday’s doubleheader against St. Louis after missing his start Friday. … 3B Kris Bryant (sore left wrist and finger) returned to the lineup after missing two straight games. He batted leadoff and went 1 for 5. … LHP Brad Wieck (left knee soreness) has had a setback in his return from a hamstring injury, manager David Ross said. … RHP James Norwood (right shoulder) is progressing with his throwing program, Ross said.

Brewers RHP Josh Lindblom (1-0, 5.68 ERA) starts Sunday’s series finale against the Cubs and LHP Jon Lester (2-0, 1.06 ERA). Lindblom earned his first victory as a Brewer and starter Aug. 6 against the Chicago White Sox. Lester allowed a run and three hits in six innings against Cleveland in his last start.