Concerns over intersection after cyclist hit by CTA bus

There is growing concern over a Chicago intersection that is notorious for accidents involving pedestrians.

CHICAGO - There is growing concern over a Chicago intersection that is notorious for accidents involving pedestrians.

On Sunday, an 85-year-old cyclist was hit and killed by a CTA bus. It happened around 5 p.m. in the Buena Park neighborhood, at the intersection of N. Marine Drive and W. Buena Avenue near Montrose Harbor.

Debra Rosenberg came upon the scene after the incident had happened.

"You start seeing the fire department bringing out jaws, and the pumps, to try and lift the bus up. And you're realizing they must have gotten caught under the bus," she said.

On Wednesday night, a collection of candles, flowers, cycling shoes and a hat memorialized the intersection where the man was killed. 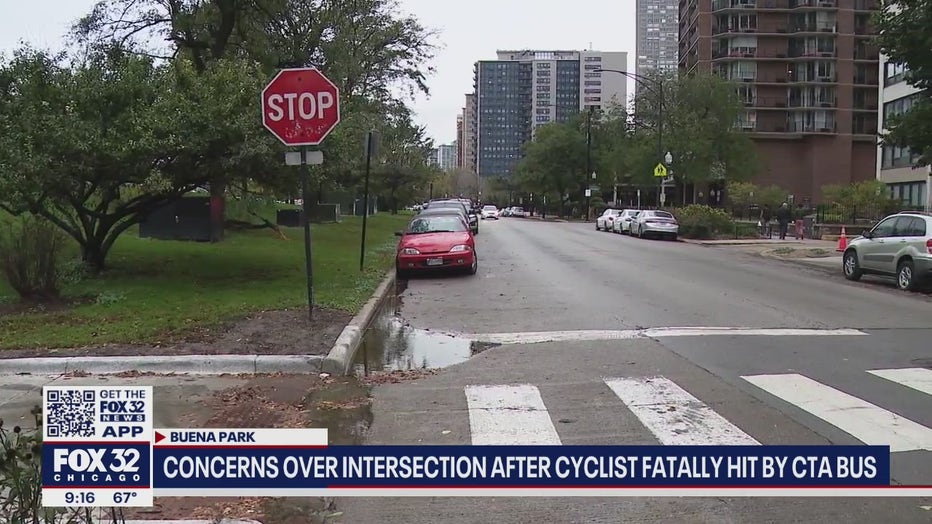 She and other neighbors are starting a petition to put in more safeguards. She suggests lighted stop signs or a traffic light and cross walk.

"It ultimately does come down to, I want the community to be safe. I want the neighborhood to be safe and Sunday kind of felt like the breaking point for a lot of us," she said.

In a statement to FOX 32, the alderman’s office offered their condolences to the victim’s family and friends and asked anyone with information on the incident to contact police. They did not provide any information on changing the intersection markings.

The Chicago Police Department’s Major Accidents Division is investigating the bus incident. Police say the bus driver was not cited.

The identity of the cyclist has not been released.