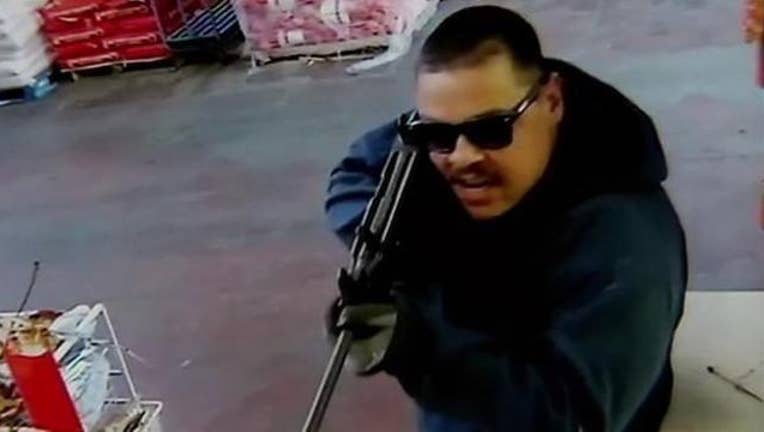 Police have released a very clear and disturbing surveillance camera video of the robbery that took place April 23rd at 7:39 p.m.

The suspects enter the business armed with a weapon described as, “a long barreled Uzi type sub-machine gun”.

Employees were then assaulted; one female employee can be seen being punched by a heavy-set suspect and appears to be knocked-out cold or is cooperating by keeping perfectly still as she sits slumped over in a chair. Both suspects fled the scene with documents and cash and have not been identified.

One of the employees, Chi La, said his 60-year-old cousin was the woman who was punched. He said it's a family run business that's been at the South 3rd Street location for 10 years.

La is still shaken up, recalling what happened that evening.

La said one of the suspects was seen in the warehouse a week prior. HP Food Supply sells Asian food products to Vietnamese restaurants in town. He said during the robbery a young female employee was in the restroom. It happened after hours so no customers were inside.

"I'm shocked the type of weapons that they had," said Neighbor Jessie Ortiz.

"A lot of times these guys want to go in and go out," said Sgt. Enrique Garcia of San Jose Police. "When nobody is resisting there's no need for people to get assaulted. These guys took it to another level."

La said the victim who was punched was treated.

The suspects’ vehicle is an early 2000s silver Acura TL with no front plate license plate. The first suspect is a Hispanic male, about 30-49 years old. 5' 10", 200 lbs, with black hair and a mustache.

He was seen on the video wearing a white undershirt, blue hooded sweatshirt, brown construction type boots, black pants, and armed with a sub-machine gun. The second suspect is also described as a Hispanic male adult, 20-35 years old, 5' 10", 200 lbs. with black hair and was wearing a black shirt with "DBD" on the front, gray sweatpants, a black ski mask, and gray tennis shoes.

Anyone with information regarding this incident is urged to contact Detective Mike White #4104 of the San Jose Police Department's Robbery Unit at (408) 277-4166, or persons wishing to remain anonymous may call the Crime Stoppers Tip Line at (408) 947-ST OP (7867).

Persons providing information leading to the arrest and conviction of the suspect may be eligible for a cash reward from Silicon Valley Crime Stoppers.