Most people see the ruins of a burned-out church. But the senior pastor of Antioch Missionary Baptist Church on Chicago's South Side sees a new chapel, a health and wellness center, and a youth center.

CHICAGO - Most people see the ruins of a burned-out church at the corner of South Stewart and West Englewood avenues.

But the senior pastor of Antioch Missionary Baptist Church sees a new chapel, a health and wellness center, and a youth center. And he pictures himself cutting the ribbon on the new complex on Easter 2024.

The chapel will be a space where the congregation can gather and worship, celebrate their faith and encourage one another through "the kind of love that was demonstrated on that hill called Calvary," said Dew.

The health and wellness center will include a gym, room for recreational activities and house the church’s health ministry. Meanwhile, the youth center will offer mentorship, instruction on life skills and Christian education for the community’s children and teens. 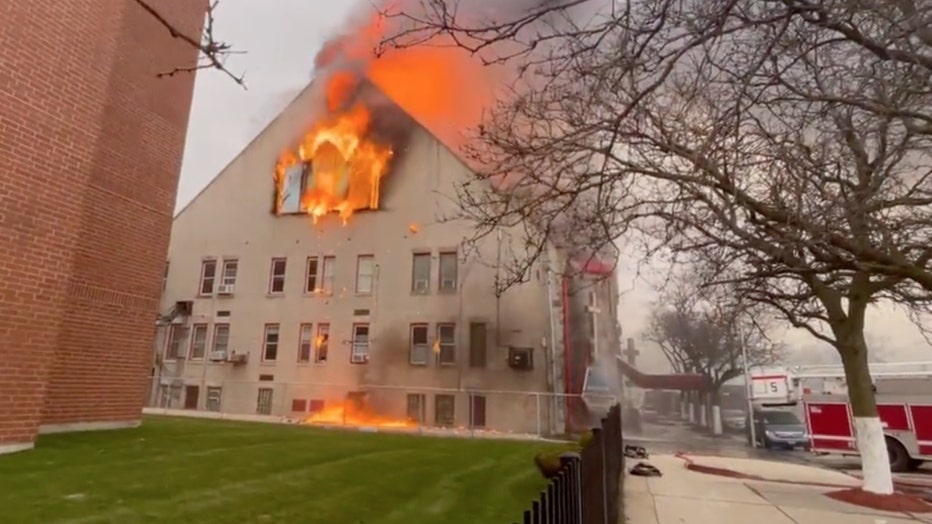 Antioch caught fire April 15 and reignited several times in the following days. The damage resulted in the need for full demolition of the historic building. The only thing to be saved was the church’s iconic cross-shaped neon sign.

Demolition began April 20. Only one wall remained standing Friday. Demolition is expected to be completed within the next two weeks.

"When I left Wednesday, the south wall and the west wall were still standing," said Dew. "When I got back this morning I came into the church and saw those two walls (gone). I almost felt the same way I felt when I saw the flames coming out of the roof. It was devastating." 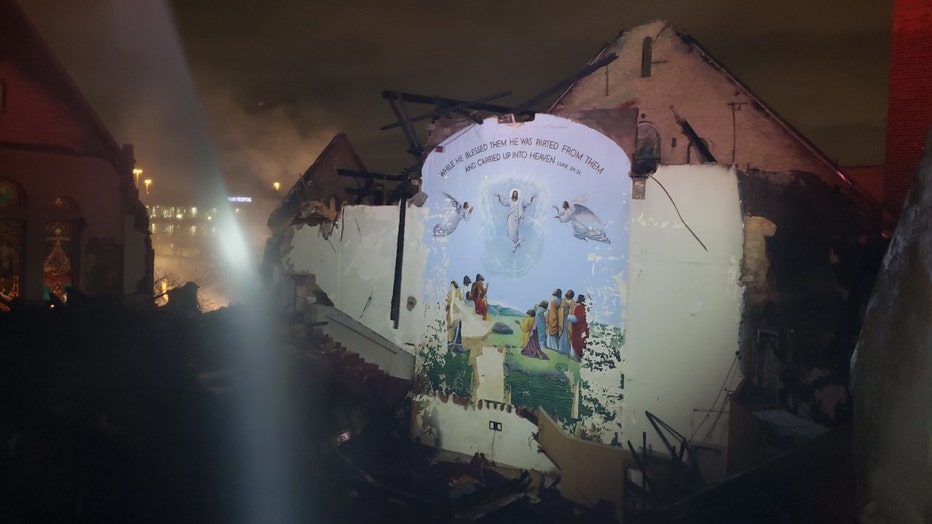 A mural at Antioch Missionary Baptist Church was seemingly untouched after a fire destroyed the building. (Chicago Fire Department)

No one has yet calculated how much the new complex might cost, though the church has so far raised $40,000. Antioch will kick off a new fundraising effort Sunday with churches in North Carolina, New York, Tennessee, Mississippi, California and even the Netherlands joining the Englewood church in prayer at 11 a.m. Central time.

"Any of us could have had this tragedy," said Tyone D. Hughes, senior pastor at Third Baptist Church of Chicago, who helped organize Sunday’s event. "We’re all just one moment away from a tragedy. And so it was important that the church be its own guardian to help one of us, who is a part of all of us, to rebuild what is a historical staple in our city."

In addition to raising money for the new facility, Hughes said Antioch hopes Sunday’s event can become a blueprint of global collaboration.

"The church has an unfortunate profile sometimes that we cannot work together because of our differences in doxology and theologies," said Hughes. "We want to prove that our differences don’t separate us. We hope that this can become a national blueprint for us to be able to work together not just now but in the future."

Sunday’s event will be livestreamed on the Antioch website, ambcchicago.org. Donations also can be made through the site.