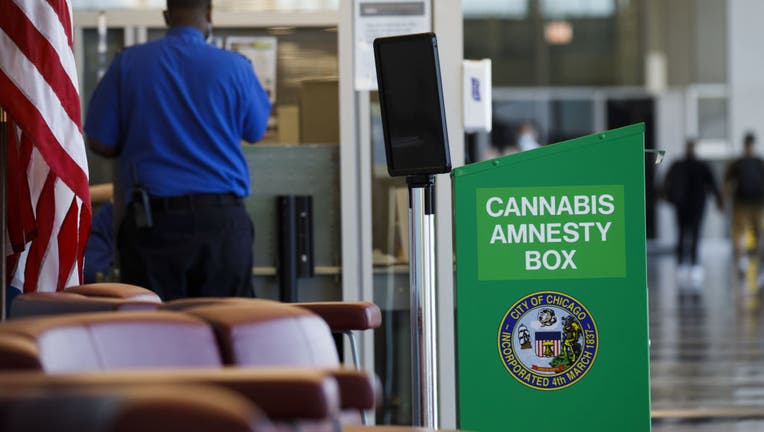 CHICAGO - Millions of passengers have flown out of Chicago since weed was fully legalized in Illinois, but only a few dozen have pitched their pot in the "cannabis amnesty boxes" set up at the city’s two major airports.

Shortly after the prohibition on recreational pot was lifted at the start of 2020, social media users joked and jibed when the receptacles first appeared near every TSA checkpoint at O’Hare and Midway international airports, offering a place to ditch weed since it’s illegal to take on a flight.

"What’s it take to get hired as an amnesty box emptier?" wrote one Twitter user.

That job, which is actually handled by the Chicago Police Department, hasn’t been very demanding, though. Only 34 collections have been made from January 2020 through March 20, including 22 at O’Hare and 12 at Midway, according to logs obtained through an open records request.

Only half the logs show that either cannabis, suspected cannabis or a green leafy substance was recovered from the boxes. The others don’t explicitly mention weed — with one log showing that only "plastic bags" were found during a check — indicating the boxes may in some cases double as trash cans.

In many instances, multiple items — including bags and packages — were pulled from a box at once, the records show. The recovered items were destroyed 14 times, but were marked simply as "received" in most cases.

While local authorities have said they aren’t arresting passengers caught with pot, federal law still prohibits the transportation of weed across state lines. Thus, the amnesty boxes give travelers an easy way to avoid any trouble.

Although the boxes haven’t seen much action, one at Midway was the scene of a cannabis caper just 22 days after the drug was legalized.

A passenger at Midway took a picture of an amnesty box that evening and then snatched some pot before a cop could empty it, police records show. He apparently flew off scot-free.

That was the only incident of theft or attempted theft logged by cops.

Just over a month later, the original blue boxes were replaced with green ones that are bolted to the floor and have a more secure, mailbox-like loading compartment.

A spokesperson for the Chicago Department of Aviation said the 12 new amnesty boxes at the two airports cost roughly $29,000. The original boxes, which were wooden, "were made in-house at no additional cost," the spokesperson said.