Capitol police officers shared their experiences Tuesday during the first hearing of a committee investigating what happened during the January 6 siege.

Rep. Adam Kinzinger, R-Ill., appeared on the verge of tears as he spoke during the questioning round of the Jan. 6 hearing, following Officer Michael Fanone's account of how he was "tortured."

Fanone described the violence inflicted against him by the pro-Trump mob and how individuals only intervened to stop the attacks after he shouted that he has kids.

"I never expected today to be quite as emotional for me as it has been," he said. "I think it's important to tell you right now, though, you guys may like individually feel a little broken. You guys all talk about the effects you have to deal with… but you guys won. You guys held."

"Democracies are not defined by our bad days. We're defined by how we come back from bad days. How we take accountability for that. And for all the overheated rhetoric surrounding this committee, our mission is very simple: It's to find the truth and its to ensure accountability," Kinzinger added. 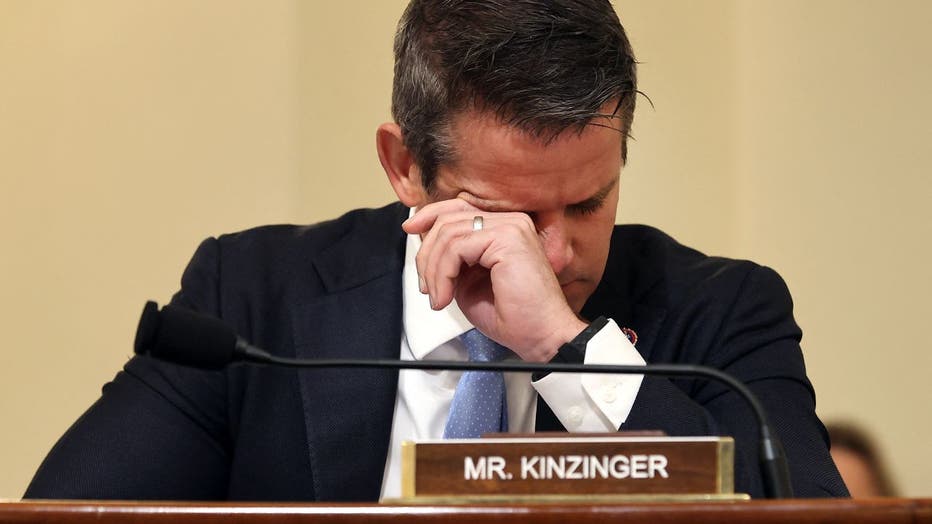 U.S. Rep. Adam Kinzinger (R-IL) wipes his eyes as he listens to testimony during a hearing by the House Select Committee investigating the January 6 attack on the U.S. Capitol on July 27, 2021 at the Cannon House Office Building in Washington, DC. Me (Chip Somodevilla/Getty Images / Getty Images)

Kinzinger added later, again getting choked up: "We may have our deep differences on other policy issues, but we are all Americans today. And we thank you for holding that line."

Rep. Adam Schiff, D-Calif., also got choked up during his remarks.

"If we're so driven by bigotry and hate that we attack our fellow citizens as traitors if they're born in another country, or they don't look like us, then God help us," Schiff said, visibly emotional.

"But I have faith because of folks like you," he said referring to the officers. "I didn't expect this could be quite so emotional either but it must be an 'Adam' thing today."

Capitol police officers share their experiences Tuesday during the first hearing of a committee investigating what happened during the Jan. 6 siege.