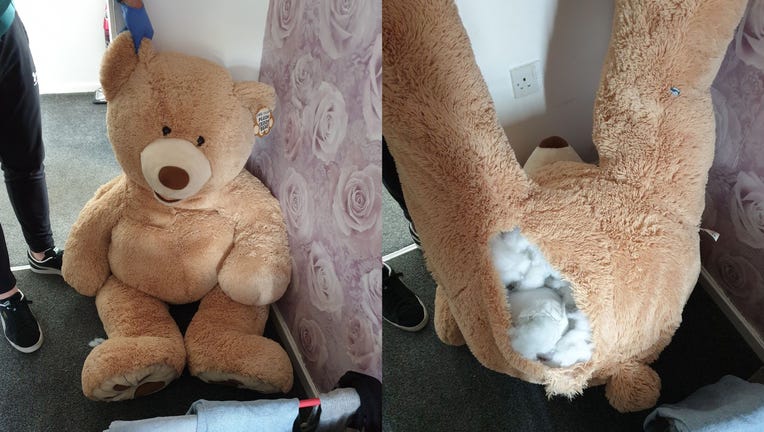 The giant stuffed teddy bear that the suspect used to hide from police is pictured in provided photos. (Credit: Rochdale GMP)

MANCHESTER, England - Authorities said a teenager wanted for stealing a car in England was caught hiding from police in a "bear-y" interesting place: a giant stuffed teddy.

The suspect, identified as 18-year-old Joshua Dobson, was arrested in July in Rochdale, a town outside of Manchester, according to local police. In May, Dobson was accused of both stealing a vehicle and not paying for fuel on the same day.

Area police went to look for Dobson in July at an address in Rochdale and found him in an unusual hiding spot.

"When we went to arrest him, our officers noticed a large bear breathing in the address before finding Dobson hidden inside," the local Rochdale authorities said in a Facebook post, shared this week.

Dobson was officially sentenced last week to nine months in prison for the crimes, which included theft of a motor vehicle, driving while disqualified, and not paying for fuel, authorities said.

Bear chows down on McDonald's after smashing car window

The tiny town of Jackson, New Hampshire, is dealing with a bear that's become a big nuisance.

In the statement, Rochdale authorities opted for some bear puns — noting that Dobson is now "stuffed behind bars."

"Hopefully, he has a bearable time inside," the local police added.