A racist question about china on a sixth-grade social studies test led to the suspension of three teachers.

CARROLLTON, Texas - A racist question about china on a sixth-grade social studies test led to the suspension of three teachers.

The Carrollton-Farmers Branch ISD superintendent called the language inappropriate, disrespectful and said there was an investigation.

But parents will have to decide for themselves whether he and the district are being transparent.

The superintendent never admitted the language was racist and never offered an apology.

The sixth grader’s family says they still have yet to receive an official apology from the district or any type of direct communication.

Joy Lim was in disbelief while peering over her younger sister’s shoulder while she took her sixth-grade social studies quiz. It was a multiple-choice question. Lim says she wasn’t going to let slide…

"Teaching this material to 12-year-olds is wildly inappropriate," she said. "I was like, ‘I have to take a picture of this. This is crazy! I have to send this to the district or someone and demand an explanation.’"

Besides making a formal complaint to the district, Lim also posted the screenshot on social media.

The quiz at Blalack Middle School asked, "Which one of these Chinese norms is true?" It was followed by answers referring to etiquette in a restaurant, punishment for children who steal candy and the consumption of certain animals. 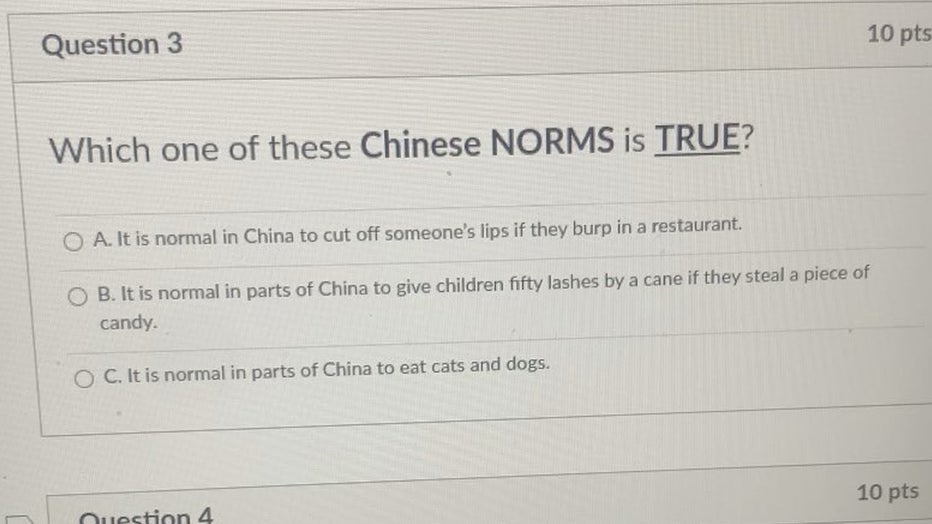 "The email I received back was very insincere," Lim said. "It was a copy and paste of the statement they put on Twitter, and I was very disappointed."

Carrollton-Farmers Branch ISD said in a statement it’s launching an investigation, and three teachers are now on paid administrative leave.

"Three employees used an inaccurate depiction about Asian Americans on a middle school social studies test. The words used for the question were inappropriate," he said.

"They should be fired," said parent Carlos Aguilar. "They do not represent our community here."

"I too am Asian, and I worry about nowadays something abusive something that’s hate actions," said parent Jihea Kim. "It’s very dangerous."

The district says in a statement that it will enhance a recently launched diversity training initiative, but no one from the district would take questions on or off camera.

FOX 4 wanted to know if the curriculum was approved by the district or created by the three teachers under investigation or if anything is being done to ensure this doesn't happen again.

The district has not mentioned an apology in any written or video statement.

Lim wonders what would’ve happened if she wasn’t watching.

"That is the most shocking and disappointing part is that they are three educators who thought this was ok," she said.

Lim says usually her sister can go back and look at previous quizzes online, but this specific one has been taken down.