CDC: Over 90% of US counties have substantial, high COVID-19 transmission

Dr. Rochelle Walensky, director of the CDC, said on Aug. 12, 2021, that more than 90% of U.S. counties are reporting substantial to high transmission of COVID-19.

The CDC keeps track of the number of new cases being reported by each state’s health departments and so far, every single state apart from California, Puerto Rico and several U.S. territories are showing the highest levels of COVID-19 transmission.

But California and Puerto Rico are not doing much better, as both state and territory are orange which is the "substantial transmission" category.

The average level of transmission for the entire country is high, according to the CDC, with a seven-day rolling average of 146,182 daily new cases of COVID-19, which increased 6.1% compared with the previous seven-day moving average at 137,783. 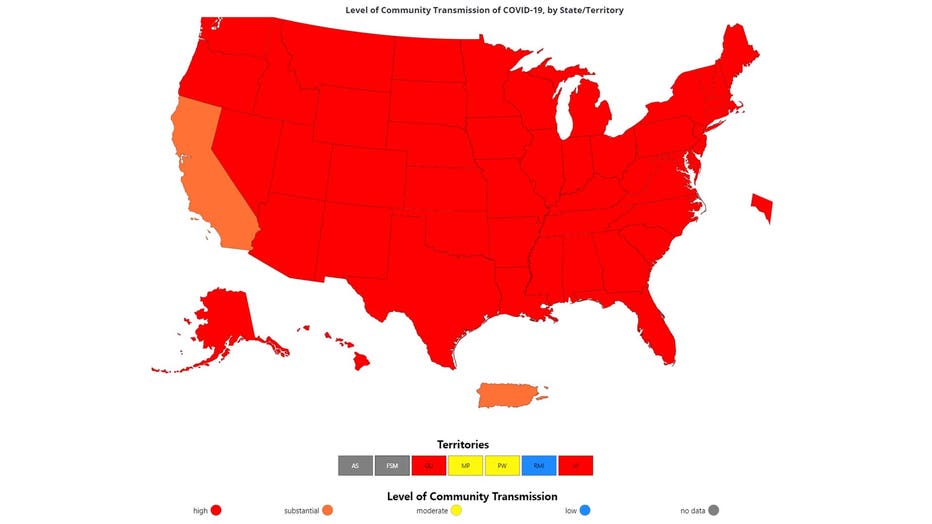 The surge in new daily cases is being largely driven by the delta variant, according to data collected by the CDC.

Meanwhile, COVID-19 deaths in the U.S. have climbed to an average of more than 1,900 a day for the first time since early March, with experts saying the virus is preying largely on a distinct group: 71 million unvaccinated Americans.

The increasingly lethal turn has filled hospitals, complicated the start of the school year, delayed the return to offices and demoralized health care workers.

"It is devastating," said Dr. Dena Hubbard, a pediatrician in the Kansas City, Missouri, area who has cared for babies delivered prematurely by cesarean section in a last-ditch effort to save their mothers, some of whom died. For health workers, the deaths, combined with misinformation and disbelief about the virus, have been "heart-wrenching, soul-crushing."

Twenty-two people died in one week alone at CoxHealth hospitals in the Springfield-Branson area, a level almost as high as that of all of Chicago. West Virginia has had more deaths in the first three weeks of September — 340 — than in the previous three months combined. Georgia is averaging 125 dead per day, more than California or other more populous states.

"I’ve got to tell you, a guy has got to wonder if we are ever going to see the end of it or not," said Collin Follis, who is the coroner in Missouri’s Madison County and works at a funeral home.

The nation was stunned back in December when it was witnessing 3,000 deaths a day. But that was when almost no one was vaccinated.

Now, nearly 64% of the U.S. population has received at least one dose of the COVID-19 vaccine. And yet, average deaths per day have climbed 40% over the past two weeks, from 1,387 to 1,947, according to data from Johns Hopkins University.

Health experts say the vast majority of the hospitalized and dead have been unvaccinated. While some vaccinated people have suffered breakthrough infections, those tend to be mild.

Many low-vaccination communities also have high rates of conditions like obesity and diabetes, said Dr. William Moss of Johns Hopkins. And that combination — along with the more contagious delta variant — has proved lethal.

"I think this is a real failure of society and our most egregious sin to be at this stage where we have hospitals overwhelmed, ICUs overwhelmed and hitting this mark in terms of deaths per day," Moss lamented.

The Associated Press contributed to this report. This story was reported out of Los Angeles.