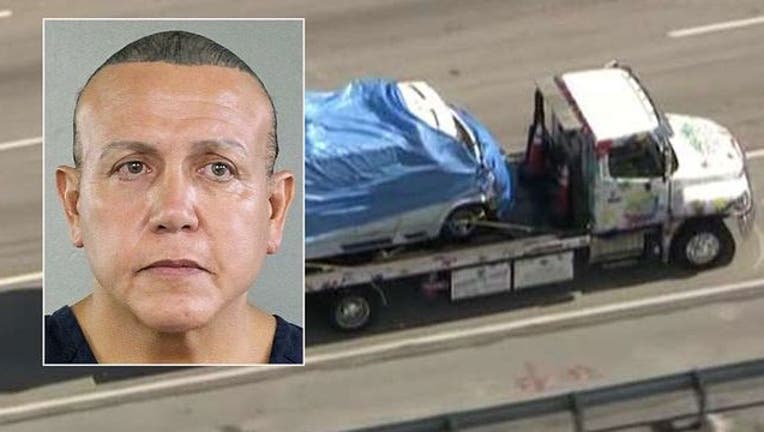 The person in custody was revealed to be Cesar Sayoc, a 56-year-old who lived in Aventura, Florida. Photos of what many claimed to be Sayoc's white van surfaced on live television, as officials put a tarp over it and transported it, and later, in more detail, online. The van, which was parked in a Plantation, Florida, neighborhood, appeared to be covered in stickers and photos of President Donald Trump and Vice President Mike Pence, in addition to other stickers about politics and soccer.

Sayoc was arrested at an auto parts store in Plantation.

The arrest comes days after a coast-to-coast manhunt for the culprit behind what appeared to be a mail bombing campaign. More details are expected to unravel in a 2:30 p.m. ET news conference led by the Department of Justice.

The postal markings on the packages appeared to stem from the Sunshine State, leading investigators to concentrate on Florida as a “region of interest,” two sources previously told Fox News.

Here’s what we know so far about the alleged package bombing suspect.

Court records show Sayoc has a history of arrests. He was previously arrested for making terroristic threats and was allegedly known to law enforcement.

How did law enforcement officials catch him?

Investigators examining the explosive devices sent to high-profile Democrats focused on forensic clues to help nab the suspect, gathering fingerprints and DNA evidence while tracking the origin of the packages and the components used to make the bombs. A government source told Fox News Thursday stamps on several of the suspicious packages were being analyzed by the FBI in Quantico.

"If there is a human involved, there is a high probability you're going to get somewhere investigatively," Larry Johnson, a former head of criminal investigations for the U.S. Secret Service, previously told The Associated Press.

The FBI also reached out to retailers to zero in on where the elements of the bombs were made and where they were sold.

"We've carried out a far-reaching federal, state and local investigation to find the person or persons responsible for these events. These terrorizing acts are despicable and have no place in our country," Trump said while delivering remarks at the Young Black Leadership Summit Friday.