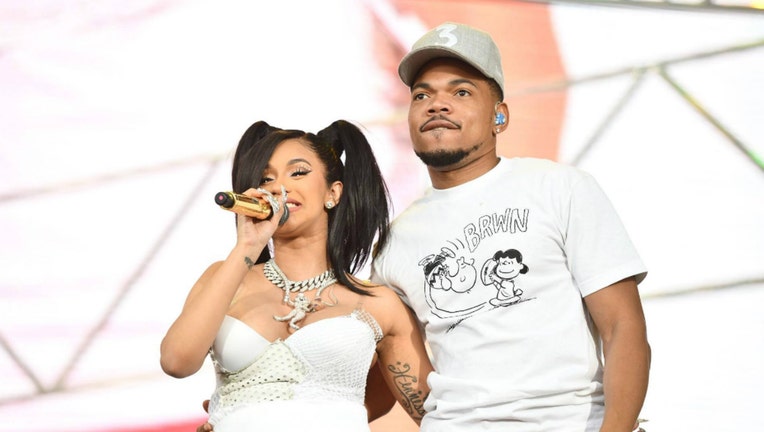 INDIO, CA - APRIL 15: Cardi B (L) and Chance the Rapper (R) perform on the Coachella stage during week 1, day 3 of the Coachella Valley Music and Arts Festival on April 15, 2018 in Indio, California. (Photo by Scott Dudelson/Getty Images for Coachell

CHICAGO - During a podcast on Tuesday with rapper and actor T.I., Chance The Rapper and Cardi B both said they believe President Donald Trump will get re-elected in 2020.

The reason “why we keep getting presidents that we don't want is because we keep getting tricked into thinking we have a choice,” Chance said over the phone. “I think, totally believe -- and y'all can quote me on this a couple years down the line -- I think Trump is going to win again at the next election because he's got the biggest base.”

T.I. responded to Chance by saying, “I don’t believe that.”

WGCI quoted Cardi on their website as also saying, “I really hate to say it, but sometimes I do believe that Trump will be winning,” she said. “Just because due to the fact that every single time I don’t see nobody saying they love a Democratic candidate. There’s no candidate that people are saying like we love, we want them to win.”

Chance also added, “The next president after Donald Trump will be our first-ever independent president," he said. "And if they not independent, they'll be from a fringe party.”