BOSTON - Daniel Martinez formed close bonds with his fellow Marines during a four-year stint in the military.

After his tour ended last fall, the Chicago native traveled frequently to visit the friends he made. Last weekend, he went to Boston to celebrate St. Patrick’s Day with some of them.

"He was really excited to go there to an Irish pub for Saint Patrick’s Day" with his friends, his older sister Micaela Martinez said. "He went out of his way to spend time with them. They were his brothers."

But the Saturday evening celebration turned deadly after a dispute with a bouncer, who allegedly chased Martinez after denying him entry and fatally stabbed him.

Alvaro Larrama, 38, faces a murder charge in the stabbing outside the Sons of Boston bar on Union Street, according to the Suffolk County prosecutors.

Martinez, 23, and his friend had been waiting in line outside the bar and had a brief conversation with Larrama before they were denied entry, prosecutors said. As Martinez and his friend walked away, Larrama allegedly chased after him with a knife.

Surveillance video shows Martinez defending himself, raising his hand and crashing an aluminum beer bottle over the bouncer’s head, prosecutors said. Larrama allegedly stabbed Martinez once in his chest.

Larrama’s colleagues ushered him back into the bar, where the bouncer went to the restroom and washed his hands, discarded his sweatshirt and turned his shirt inside out, prosecutors said. He allegedly left through a back exit.

Larrama turned himself in Monday morning and was denied bail during a court hearing.

"The heartbreak for Mr. Martinez’s family, and for all those who knew and served with him, is incalculable," District Attorney Kevin Hayden said in a statement. "This is also heartbreaking for Boston, because it represents an image of the city that does not truly reflect who we are." 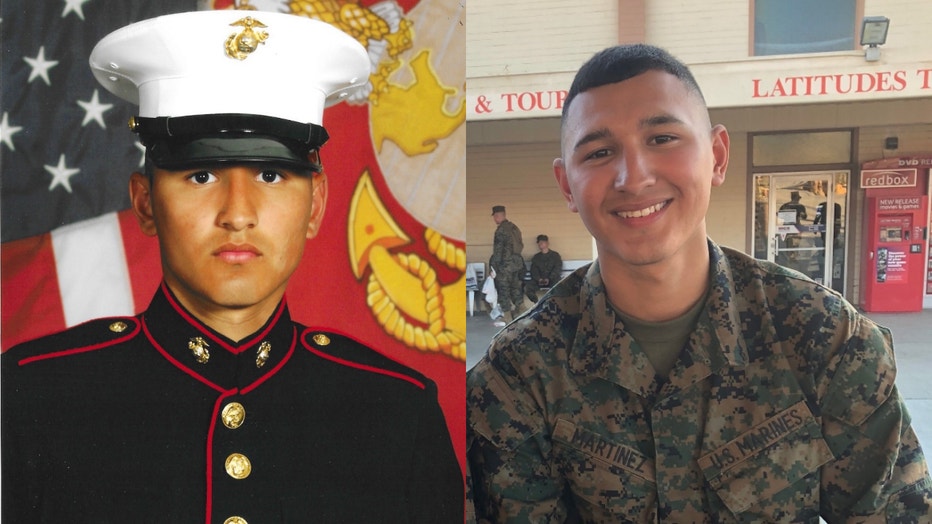 Martinez’s mother said she is struggling to overcome the shock of losing her son so suddenly. Her son’s friends in the Marines Corps are "tormented by losing him," Apolonia Martinez said. "They can’t comprehend on what happened. Especially after spending four years with him in danger on a daily basis."

She said her son’s fellow Marines have reached out to her to express their condolences. "His dad and me weren’t aware of the magnitude of friends he had and how heartbroken they are. It speaks to the character of my son and how loving he was."

Daniel Martinez grew up in the Gage Park neighborhood, living above a funeral home where his father worked until he was 5 years old, his sister said. His parents moved the family to northwest Indiana because they wanted their kids to grow up in the suburbs and attend a Christian school, Micaela Martinez said.

After high school graduation, Daniel Martinez enlisted in the Marine Corps and rose to the rank of sergeant. Martinez served in the 11th Marine Expeditionary Unit, a spokesman for the Marine Corps said. His most recent assignment was to the 3rd Assault Amphibious Battalion, 1st Marine Division, at Camp Pendleton, California.

Boot camp was an ordeal — a tear gas chamber, survival tests — but Martinez came out of it a stronger person, his sister said. "Boot camp was rough and really pushed him to his limits. It was transformative for him. It really showed him that he has grit."

Martinez bonded with his fellow soldiers, his sister said. "He went out of his way to spend time with them. He hadn’t forgotten about them."

Martinez was excited about his trip to Boston because of his interest in Irish culture, his sister said. "He loved Irish culture because he was a fan of Conor McGregor."

Martinez loved the boxer so much he got a life-size cardboard cutout of McGregor. Micaela Martinez said she’s still sometimes startled by the cutout that’s still in his room at his mother’s Crown Point home.

Discharged from the Marines in September, Martinez returned to his father’s home in Palos Hills to help his dad’s funeral home businesses in Little Village and near Midway. "He wanted to be close to my dad to work with him," she said.

Daniel Martinez had a sense of humor and was sometimes "silly" and "goofy," his sister said. He loved to watch movies and shows with his siblings, including sitcoms like "The Office," "King of Queens" and "It’s Always Sunny in Philadelphia."

His favorite show was "The Sopranos," and he convinced his family to watch it too. "When he finished it the first time, he said it was a real hard time for him because he had to go back and watch it over again," his sister said.

Daniel Martinez loved skiing, which he was introduced to in the Marines, and had a budding interest in photography. Martinez learned how to use computer software to edit footage he took of his friends skiing, and shared the videos on social media. "He would edit them, put effects on them and get creative with the videography," his sister said.

Martinez wanted to study film production at Columbia College, his sister said. "He wanted to go to school. He found a passion" with video, she said.

Daniel Martinez was a giving person and had once given a jacket to a homeless person in San Diego, his sister said.

He brought people together and had organized a Thanksgiving meal with his fellow soldiers who were also unable to see their families that holiday. "He coordinated them staying at an Airbnb and ordered the catering," Micaela Martinez said. "He wanted everyone to feel like they had a real Thanksgiving despite not being able to fly home for the holiday.

"My brother was a beautiful person. My life is changed forever without him," his sister said.