Mayor Lori Lightfoot on Wednesday blamed a West Side porch collapse that killed a 53-year-old man and seriously injured two others on a "family home" that a brother and sister could not afford to maintain.

CHICAGO - Mayor Lori Lightfoot on Wednesday blamed a West Side porch collapse that killed a 53-year-old man and seriously injured two others on a "family home" that a brother and sister could not afford to maintain.

Lightfoot talked about the horrific collapse during the grand opening of a senior citizens building in Englewood, the Chicago Sun-Times is reporting.

She used the tragedy to underscore the need to solve Chicago’s affordable housing crisis and to help impoverished residents make the repairs and routine maintenance they need to stay in their homes.

"Yesterday, there was a building collapse on the West Side in Ald. Jason Ervin’s ward. What we learned is that a sister and a brother who were living in the family home had fallen on hard times and were not able to keep up the upkeep of their property," the mayor said.

"As fate would have it, a truss at the top of the building failed. Part of the façade fell down as they were sitting outside enjoying the warm weather."

Anthony Wright, 53, was pulled from under the stone debris and pronounced dead, fire officials and the Cook County medical examiner’s office said. His sister was examined at the scene but was not hospitalized.

A 68-year-old man was taken in critical condition to Mount Sinai Hospital with "crush injuries." A third man, 32, was taken to Stroger Hospital with a broken left leg and injured back, officials said.

Lightfoot said the building in the 3400 block of West Jackson Boulevard is "in serious trouble."

"As building inspectors have gone through it, they’ve determined that the supports that are necessary — the bones, as folks in the building trades would call it — have just deteriorated to the point of probably not being able to be salvaged," she said. 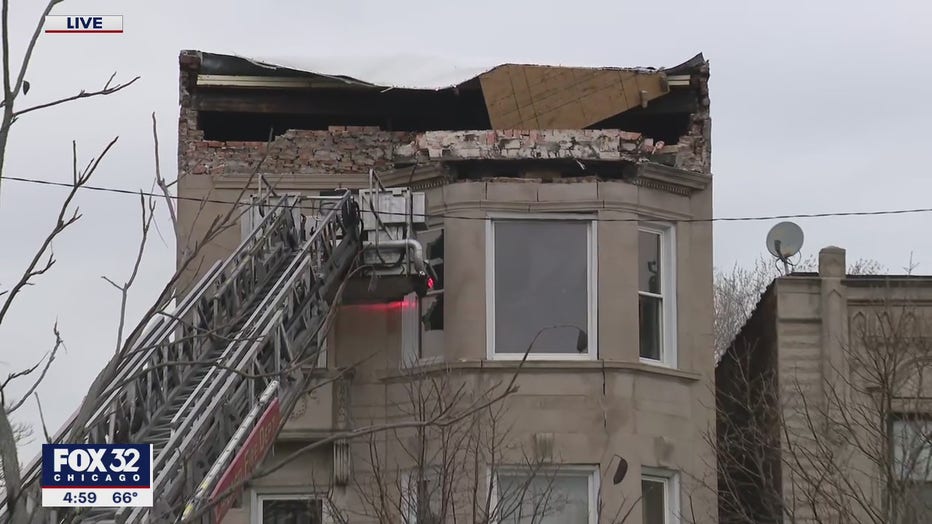 The mayor said she shared that tragic story to underscore a point: Having secure housing is "critically important." So is doing "everything we can … to replenish the supply of affordable units," particularly on the South and West Sides, she said.

"This is mission imperative for us. We’ve got to do what we did in Woodlawn: Look at ways in which we can provide homeowners, who may have fallen on difficult times, the resources they need to do the maintenance and upkeep because, for us, maybe our only asset is that family home," Lightfoot said.

"If you know somebody on your block that owns their home and has some challenges with keeping up the maintenance, please reach out to me or someone on my team because there are resources available. We’ve got to keep Black folks in their homes."