Kobe Bryant’s death has obviously touched the entire NBA, including the Chicago Bulls who paid tribute to him Monday night before their game at the United Center.

CHICAGO - Kobe Bryant’s death has obviously touched the entire NBA, including the Chicago Bulls who paid tribute to him Monday night before their game at the United Center.

Buildings across the country have been lit up in Lakers’ purple and gold to honor Kobe, and in Chicago -- in the house that one of Kobe’s idols built -- they did the same. Kobe's picture was on every screen available at the United Center and fans in attendance to watch the Bulls and Spurs play still wore Lakers jerseys in his honor.

At the end of the video, the crowd was asked to join in on 24-seconds of silence.

After the opening tip off, the Bulls took an eight-second violation with their first possession, and the Spurs took a 24-second violation to pay tribute to both of the jersey numbers Kobe wore during his career. 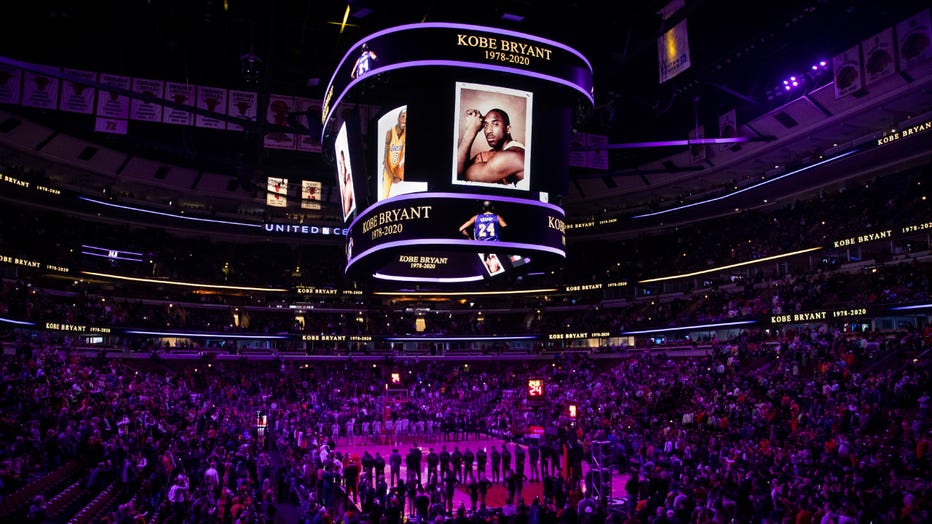 Members of the Chicago Bulls, San Antonio Spurs, and fans observe a tribute and moment of silence for Kobe Bryant before the first half at the United Center after Bryant his 13-year-old daughter Gianna and seven others were killed Sunday in a helicop (Armando L. Sanchez/Chicago Tribune/Tribune News Service via Getty / Getty Images)

The Lakers were supposed to play the Clippers Tuesday night at the Staples Center in Los Angeles. However, the league has postponed that game to give the Lakers time to grieve. Their first game since Kobe’s passing will be Friday at home against the Portland Trailblazers.

Kobe's tragic death is a crushing blow to basketball fans in Chicago. A steady stream of people were paying their respects at the United Center all day Monday. The sidewalks and walls were covered in chalk messages for the basketball icon, many of them thanking Kobe for his years of play on the court and off it.

The United Center was lit up in in purple and gold Monday honoring the legacy of Kobe. As fans poured into the Bulls-Spurs game, the tragic and sudden death of the basketball legend was top of mind. 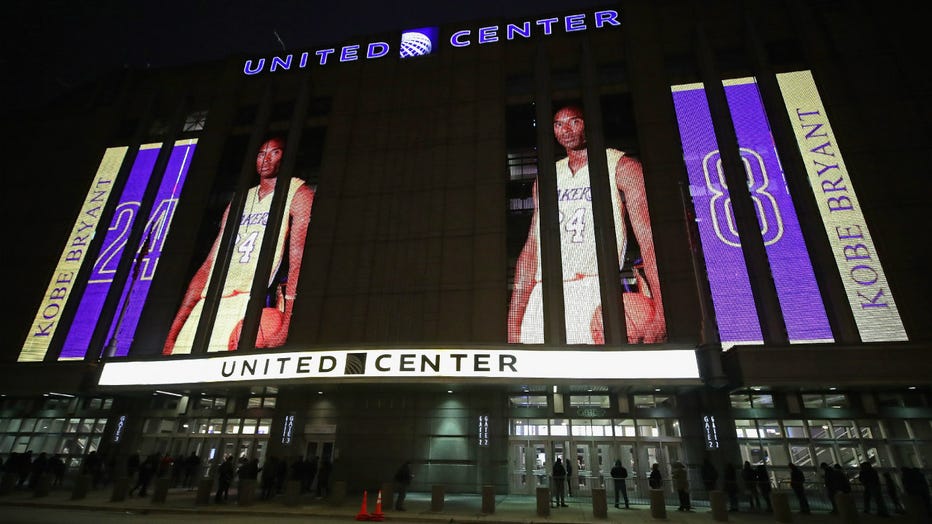 A tribute to Kobe Bryant is seen on the outside walls of the United Center before a game between the Chicago Bulls and the San Antonio Spurs on January 27, 2020 in Chicago, Illinois. (Jonathan Daniel/Getty Images / Getty Images)

“When I heard the news, I didn’t believe it and it’s just took a while to sink in. He’s been an idol to my family for a very long time,” said Aliki Ameer.

Maurice Hawks says he was lucky enough to see number 24 in action.

“Amazing, very amazing. He’s definitely an icon of the game and a lot of kids looked up to him,” Hawks said.

Brandon Norris says the news of Kobe’s death is heartwrenching, especially because he has a 13-year old-daughter, which is the same age as Gianna Bryant who also died in the helicopter crash alongside her father. 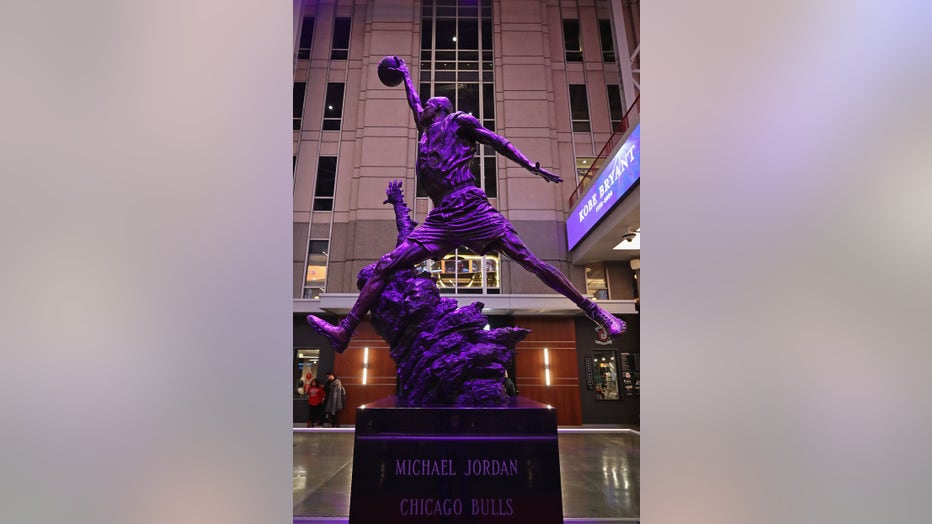 A statue of Michael Jordan is bathed in purple light in a tribute to Kobe Bryant before the Chicago Bulls take on the San Antonio Spurs at the United Center on January 27, 2020 in Chicago, Illinois. (Jonathan Daniel/Getty Images / Getty Images)

“Seeing him out there with her is...I can relate to that, so that’s why it’s touching to me,” Norris said.

In a city where the Chicago Bulls will always be number one, there is a special place for greatness.

“I love you Kobe. You rock. You are gone but you will always be remembered. Much love to you Kobe Bryant,” said fan Nicholas Staramar.