A Chicago police officer has gone viral for an act of kindness.

CHICAGO - A Chicago police officer has gone viral for an act of kindness.

When we tracked down that officer, he told us he was just doing his job. The video has been viewed more than half a million times.

It started with Brandon Wilson and his son peeking out their window.

“That's when it happened. I saw the officer out there making these wonderful, genuine connections with these children. Something clicked and I thought I had to catch this on video,” Wilson said.

The Chicago police officer was Steve Losacco, who had no idea anyone was watching as he greeted kids in Uptown.

“I was like high-fiving, fist bumping, whatever. I mean, I love kids so why not. Let ‘em know, hey, we're not bad people,” Losacco said.

“I think that we all have a part to play in reversing the hatred. I just knew it was important to share that and not comment on the children’s race or orientation or gender and if you notice on the post, all I said was the word ‘love,’” Wilson said.

“Oh, they were loving it. There were kids walking to me, walking 10, 5-feet, hitting as hard as they could with the high fives, the fist bumping, it was pretty cool,” Losacco said.

As we learned, Officer Losacco is not too comfortable on camera. But with kids, he's fully at ease as he patrols the Uptown neighborhood. 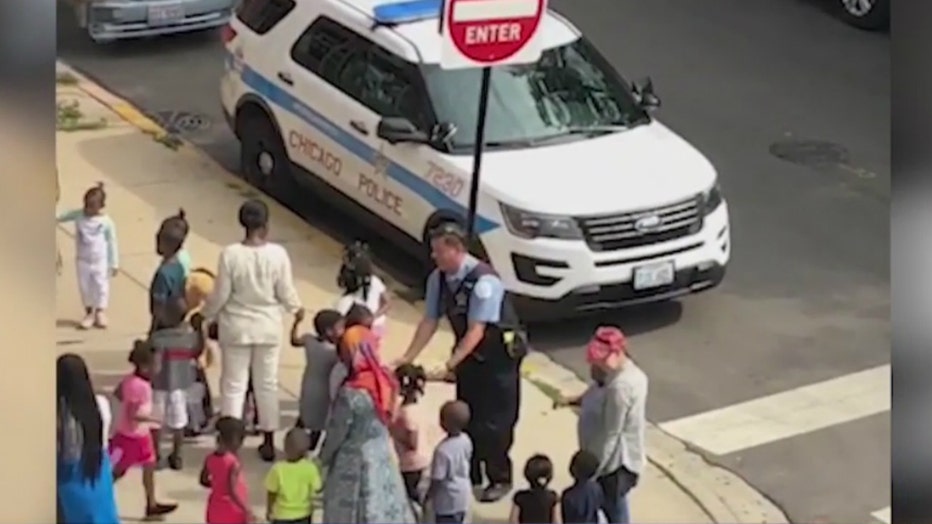 “Kids are kids. They're harmless, they're high-fiving you…they like the police usually,” Losacco said.

“Growing up on the South Side of Chicago, I feel like our Chicago police officers get a bad rep and seeing that moment with my own eyes, it would be a really good opportunity to change the narrative,” Wilson said.

Losacco never wanted to be a viral sensation, but now he sees the potential for police.

“It just lets you know our voice is powerful. It just all depends on how we use it, and if we all decide to use our voice and especially our social media in a positive manner, then you change the world. I truly do believe that,” Wilson said.