CHICAGO - Pastors disturbed over how Chicago police treated a Black woman whose home was the target of a wrong raid spoke with the mayor Friday, demanding more information about the 2019 incident and the city’s efforts to keep a lid on bodycam video.

It was the latest development in the case of Anjanette Young, a social worker who is seen on police video repeatedly pleading with officers that they were in the wrong place. She wasn’t allowed to put on clothes before being handcuffed at her home.

Some members of the Chicago City Council called for a special meeting next week to order the city to settle any legal action with Young, but they later dropped the request Friday.

The bodycam video was released Thursday by Chicago officials after they tried this week to block WBBM-TV from airing it. The TV station had obtained it separately.

Pastors spoke Friday with Mayor Lori Lightfoot, who has publicly apologized for what happened to Young during the raid that occurred before her election in spring 2019. Lightfoot acknowledged, however, that she was informed by fall of that year.

Some pastors believe city attorneys and police officers should be fired.

The video shows officers using a battering ram to break the door. An officer threw a blanket over Young’s shoulders. But because she was handcuffed, the blanket slipped off her shoulders, leaving her exposed again. 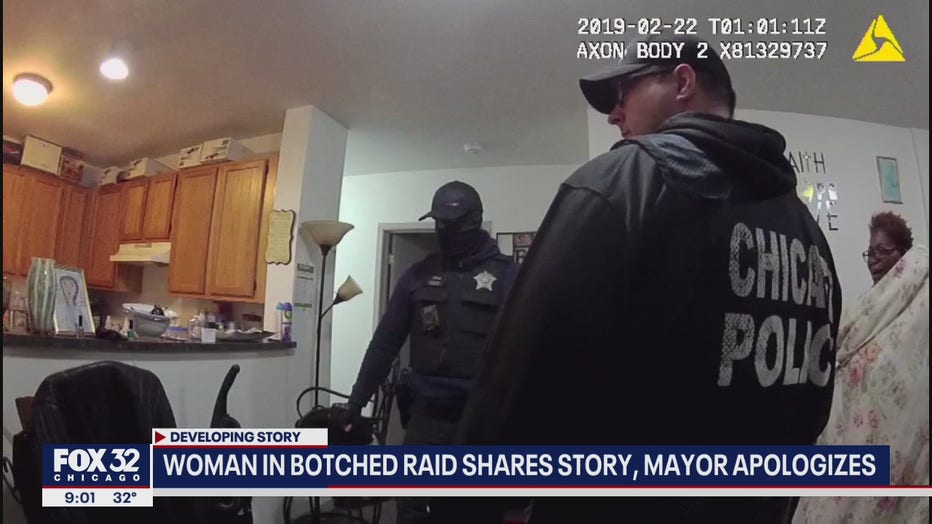 "I don’t own a gun. I don’t even like guns. You’ve got the wrong place. I promise you. You are not going to find a gun here," Young says to officers as she sobs.

Young’s lawsuit alleging civil rights violations was withdrawn in federal court in March as part of a procedural step to refile it in Cook County court.

Meanwhile Friday, Chicago dropped a request that Young’s attorney be sanctioned by a federal judge for any role in how the TV station got the video. The city said it was part of an earlier confidentiality order.

"I again want to reiterate and affirm my commitment to righting the wrongs in this case and moving forward with full transparency and accountability," Lightfoot said.